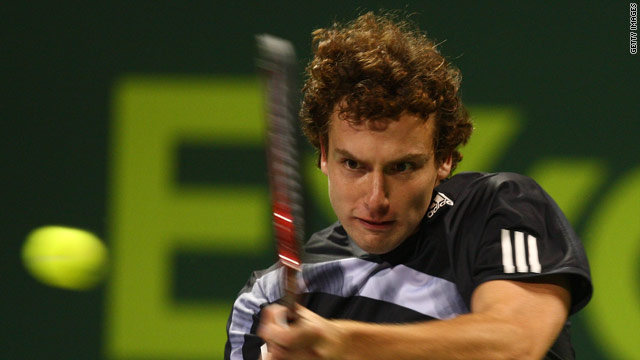 (CNN) -- World number one Roger Federer has crashed out in the second round of the clay-court Rome Masters event, losing in three sets to unseeded Latvian Ernests Gulbis.

The top seed looked set to cruise through after taking the opening set, but Gulbis fought back in the next two sets and, despite wasting six previous match points, the world number 40 eventually went through 2-6 6-1 7-5 in a match littered with unforced errors.

Federer, who will defend his French Open title at Roland Garros next month, looked woefully out of form and made under 50 per cent of his first serves as he slumped to defeat in just over two hours.

The win continued Gulbis' impressive 2010, which has seen him claim his first ever ATP Tour title at Delray Beach in February.

"It's incredible, I was shocked after the match, it's a great feeling: indescribable," Gulbis told reporters.

It was Federer's first opening round loss at the Foro Italico since losing to Andrea Gaudenzi in 2002 -- and the first time since the 2000 Monte Carlo Masters that the Swiss maestro had lost his first clay-court match of the season.

"I hope I can bounce back, it's usually what I do after a loss like this," said Federer. "When you lose, you understand how difficult it is to dominate this Tour.

"This knockout format is brutal -- one week you are great and the next week you are terrible," Federer told reporters.

There were no such problems for second seed and 2008 champion Novak Djokovic, who took under an hour to demolish Frenchman Jeremy Chardy 6-1 6-1.