Ferrer too strong for Murray in Rome 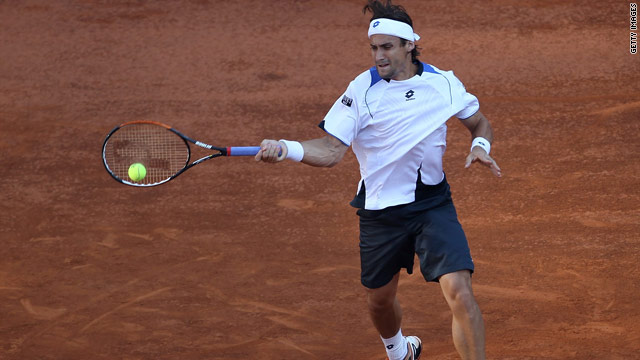 David Ferrer had too many shots for Andy Murray, reaching the quarterfinals of the Rome Masters in straight sets.
STORY HIGHLIGHTS
RELATED TOPICS

(CNN) -- Fourth seed Andy Murray's poor start to the clay-court season continued on Thursday after he was beaten in straight sets by David Ferrer in the last 16 of the Rome Masters.

Murray -- who has struggled for form this year after reaching the final of the Australian Open in January -- slumped 6-3 6-4 to the 13th-seeded Spaniard in just 96 minutes.

However, the Briton told reporters he was happy with his performance throughout the match.

"I thought it was a good match, a high standard, there were a lot of good points, I just didn't convert my chances," said Murray.

Ferrer will now face seventh seed Jo-Wilfried Tsonga for a place in the semifinals, after the Frenchman saw off Colombian qualifier Santiago Giraldo 6-3 6-4.

There were no such problems for second seed Novak Djokovic, who has yet to drop a set in reaching the quarterfinals.

The pair met in the semifinals in Monte Carlo recently, where an out-of-form Djokovic crashed out 6-2 6-2.

Meanwhile, Ernests Gulbis followed up his stunning victory over Roger Federer by ending the progress of Italy's final remaining hope of victory.

The Latvian was made to work hard to defeat Filippo Volandri 6-2 3-6 7-6 and next faces Spaniard Feliciano Lopez, who progressed when opponent Ivan Ljubicic withdrew with a side strain.