Your chance to quiz tennis greats Agassi and Graf 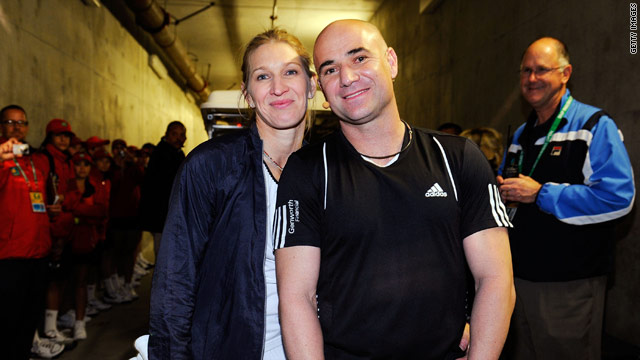 Graf and Agassi content themselves with the occasional charity or exhibition event since their retirements.
STORY HIGHLIGHTS
RELATED TOPICS

(CNN) -- What does it feel like to lift a grand slam title ? Who are the best players you have shared a court with ? Do you miss the thrill of competition and would you ever be tempted into a comeback ? What could be done to improve modern tennis ?

On Wednesday May 19, CNN's World Sport Anchor Candy Reid will interview husband and wife tennis legends Andre Agassi and Steffi Graf in Las Vegas and it will be your chance to pose questions like these, and others of your own.

It's a simple process, just add your question to the bottom of this page.

And you could hardly be seeking answers from a more authoritative source, with Graf and Agassi winning no less than 30 grand slam singles titles between them.

Germany's Graf was women's world number one for a record 377 weeks and dominated for much of the 1990s until her retirement at the end of the decade.

She won 107 career title, including 22 grand slam triumphs, plus a gold medal in the singles at the 1988 Olympics in Seoul.

Graf's most potent weapon was a blistering forehand, which allied to a strong service and crisp volleying skills made her a formidable opponent to the likes of Martina Navratilova and Monica Seles with whom she shared intense rivalry.

After her retirement, she married Agassi in 2001 with whom she has two children, Jaden Gil and Jaz Elle.

Agassi, who was born in Las Vegas, was earmarked for stardom from a tender age and his charismatic approach and on-court appearance quickly won him a huge following when he burst to prominence in the late 1980s.

He won his first grand slam title at Wimbledon in 1992 and claimed eight in total, completing a grand slam of the four majors with victory at the 1999 French Open.

Like his wife, Agassi also reached world number one and secured Olympic singles gold in Atlanta in 1996.

He retired in 2006 but made the headlines again last year with the publication of his explosive autobiography "Open" in which he admitted failing a drugs test in 1997, but said it came at a period when his personal life was in turmoil.

Agassi also claimed he "hated" tennis because of the pressure exerted on him by his father in his formative years.

He is now rarely seen on court, bar an occasional appearance on a seniors circuit or charity tournaments.

But Agassi and Graf did pair up last year to play in a special mixed doubles match against Tim Henman and Kim Clijsters to christen the new roof at Wimbledon.

Now it is your chance to get the views of two of the all-time greats of tennis.