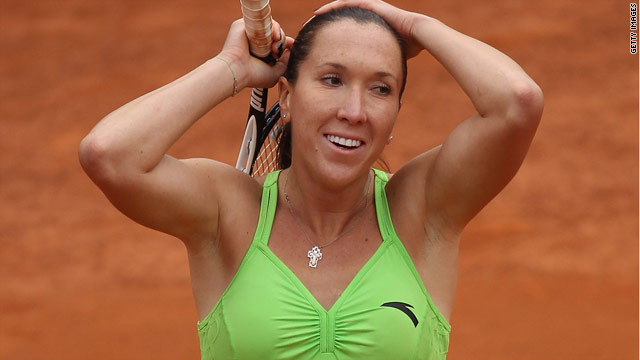 (CNN) -- Former world No. 1 Jelena Jankovic overcame current top-ranked player Serena Williams in an epic clash to reach the final of the Italian Open on Friday.

However, hopes of an all-Serbian showdown were dashed when the return to form of another previous No. 1, Ana Ivanovic, was ended by Spaniard Maria Jose Martinez-Sanchez in the other semifinal in Rome.

Jankovic, who won the clay tournament in 2007 and 2008, followed up her quarterfinal victory over Serena's fourth-seeded older sister Venus by triumphing 4-6 6-3 7-6 (7-5) in two and three-quarter hours.

The seventh seed fought back from 3-0 and 4-2 down to save a match-point in the deciding tie-breaker as she overcame what seemed like delaying tactics by the American when serving on a vital point.

I almost feel like I won that match. I can't be really upset, but I am. I feel I should have won -- I could have won
--Serena Williams
RELATED TOPICS

"I was just getting ready to serve and I was serving and all of a sudden she wasn't ready," Jankovic told reporters. "For me when the server comes to play the receiver has to be ready -- that's the rules.

"But unfortunately I had to hit another serve, regroup and refocus because I didn't want to waste my energy on that."

Williams was seeking to repeat her 2002 Rome triumph in what was her first tournament since winning the Australian Open in late January, injuring her knee in doing so.

"I almost feel like I won that match. I can't be really upset, but I am," she said.

"I feel I should have won -- I could have won. But I can't beat myself up over it, I've just come back and hadn't played a match since January."

Ivanovic, who has slumped to 58th in the rankings since winning the French Open in 2008, was seeking to reach her first WTA Tour final since March 2009.

But she was unable to show the form that this week knocked out ninth seed Victoria Azarenka and Olympic champion Elena Dementieva as she was crushed 6-4 6-2 by world No. 26 Martinez-Sanchez.

Her 27-year-old opponent followed up her own upset win over world No. 2 Caroline Wozniacki on Wednesday by reaching her third WTA Tour final.

She won minor clay tournaments in Colombia and Sweden last year, and lost in the final in Barcelona the year before.

Martinez-Sanchez has played Jankovic only twice, winning on hardcourt in 2001 when the Serbian retired hurt and losing on clay last year in the Fed Cup teams event.