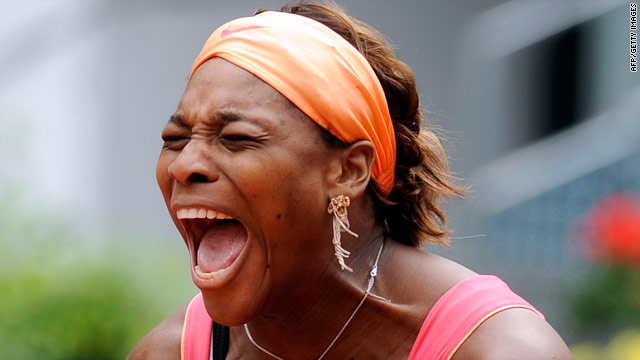 (CNN) -- World No. 1 Serena Williams survived the longest match of her career to bounce back from her Rome disappointment and reach the third round of the Madrid Open on Monday.

Williams had beaten the Russian convincingly in straight sets in their past two encounters, the most recent in Sydney in January, but needed to save a match-point at 6-5 down in the second set and also had to battle back from a 4-0 deficit in the deciding tie-break.

The 28-year-old was relieved to go through to a tie against either 16th seed Nadia Petrova having squandered a match-point in her semifinal defeat by Jelena Jankovic at the Italian Open on Friday.

"I felt really bad about losing last time when I had match-point, so I just wanted to hang in there today," she told the tournament's official Web site.

Eighth seed Samantha Stosur beat Argentina's Gisela Dulko 7-6 (7-3) 7-5, and the Australian will face Maria Jose Martinez Sanchez on Tuesday, with the Spaniard having a bye after beating Jankovic in Saturday's Italian Open final.

Jankovic will play fellow Serbian Ana Ivanovic in a battle of former world No. 1s after both were given first-round byes.

But 10th seed Victoria Azarenka of Belarus retired while 3-0 down against Chinese wildcard Shuai Peng, who will now play Israel's Shahar Peer or Russian Alisa Kleybanova.