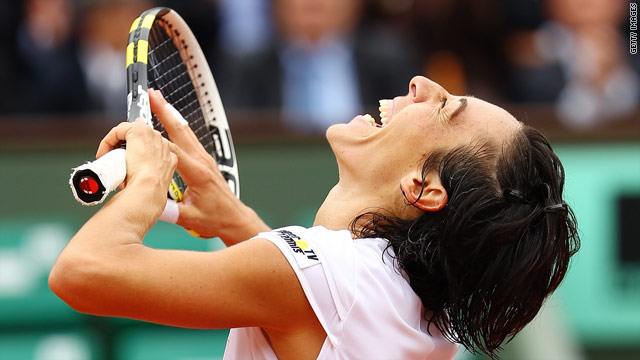 Schiavone raced through the first set in just 38 minutes, breaking 19-year-old Wozniacki three times on her way to a 6-2 triumph.

The Dane held on until 3-3 in the second set before Schiavone edged ahead to seal the match and send her Italian fans on court into raptures.

It is the furthest 30-year-old Schiavone has ever gone in a slam and the first time she has beaten a top five player at one.

After the game she told the official WTA Tour Web site: "In this moment I'm here but I'm not here. I'm so happy. I was focused and didn't let my level drop.

"All the years I've worked are showing now. Maybe it's a little late for others, but it's better late than never. And the tournament is not finished yet."

Beaten Wozniacki said: "She was playing better than me today. I was always one step behind and couldn't dominate the way I wanted to.

"I knew she was playing well. You're not playing badly when you go that far in the tournament. She's a difficult player to play against because she mixes the balls up a lot."

Dementieva won the all-Russian battle as she battled back from a set down to beat Petrova.

Petrova took the first set 6-2 but both players left the court for treatment during the opener. Petrova struggled thereafter, often hobbling between points.

Dementieva dominated the next two sets winning 6-2 6-0 in just over two hours.