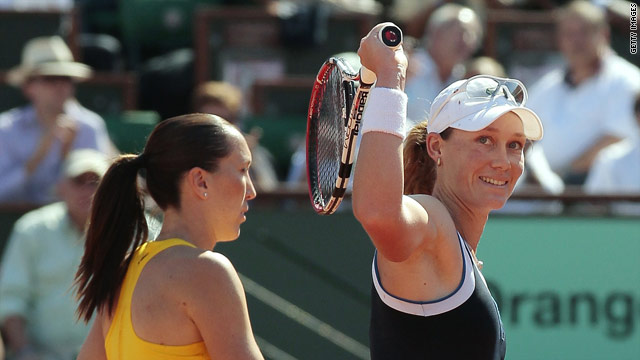 Samantha Stosur smiles at the crowd after securing her place in the French Open final.
STORY HIGHLIGHTS

(CNN) -- Samantha Stosur will play Francesca Schiavone for the French Open title after both came through their semifinals.

Seventh seed Stosur, from Australia, breezed past former world number one Jelena Jankovic in straight sets -- 6-1 6-2 -- in just one hour.

Italian Schiavone won the opening set against Elena Dementieva before the Russian retired with an injury.

Neither Stosur nor Schiavone have ever won a Grand Slam but one will break their duck at Roland Garros on Saturday.

Stosur, brimming with confidence after defeating Justine Henin and Serena Williams in Paris, quickly took control of her tie with Serbian Jankovic.

The Australian broke twice in the opening set, dropping just one game, on the way to a 6-1 triumph.

I can't believe I am here - it wasn't easy to get here.
--Samantha Stosur
RELATED TOPICS

Jankovic attempted to battle back in the second, taking a 2-0 lead but she squandered four break points at 2-1 and Stosur drew level.

That was the last chance Jankovic was offered as Stosur powered through the final four games to seal her first ever final appearance at a major championship.

Stosur told reporters: "I can't believe I am here - it wasn't easy to get here. This is the first Grand Slam final for both me and Francesca (Schiavone) so we'll both try to enjoy it and both try to play our best tennis."

Stosur will meet Schiavone -- herself playing in her first Slam final -- after Dementieva withdrew from their game with injury.

Schiavone had just taken the opening set on a tie break before the Russian pulled out.

After the match Schiavone told reporters: "I'm very happy, I'm starting to feel like this is really history. They are very happy in Italy also, I think, and it's a time for everybody to enjoy."

Dementieva said: "It was difficult to even walk. I got it after my second match and aggravated it today. It was a sharp pain, a bit too much, I couldn't really move on court.

"I was trying to play, trying to fight as it's a very special moment. But I couldn't go on any longer than I did."