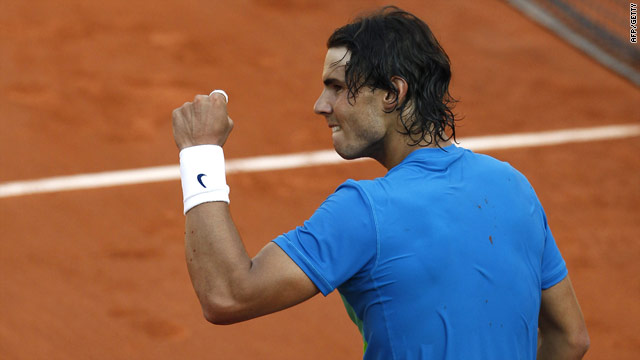 Nadal pumps his fist in his traditional celebration after beating Melzer in the semifinals.
STORY HIGHLIGHTS

(CNN) -- Rafael Nadal will get the chance to avenge his shock defeat at the French Open to Robin Soderling last year when the two meet in Sunday's final in Paris.

Soderling, who shocked Roger Federer in the quarterfinals this year, came through a five-set semifinal against Tomas Berdych while Nadal swept aside Juergen Melzer in straight sets on Friday.

Nadal was near his very best to beat his Austrian opponent 6-2 6-3 7-6 in just over two hours on Philippe Chatrier.

It will be the second grand slam final for the fifth-seeded Swede, who was beaten in straight sets by Federer last year as the world number one claimed his first French Open title.

But it was his defeat of Nadal in the fourth round which created the headlines as he ended the Spaniard's seemingly invincible run at Roland Garros, which had seen him claim four straight titles.

Nadal, who was troubled by tendinitis in his knees, lost his world number one status to Federer as he was unable to defend his Wimbledon title.

But he is now back to his best on clay and gave 22nd seed Melzer few opportunities, the best coming with a rousing late fight back in the third set.

Soderling is playing really well. I will go on court and do my best and if he beats me I will congratulate him. For sure, it will be a difficult match
--Rafael Nadal
RELATED TOPICS

Nadal served for the match at 5-4 but was broken to love, smiling ruefully to himself and then falling 6-5 down as Melzer bravely held service.

The world number two held his own service to force a tight tiebreak in which he prevailed 8-6, finally closing it out on his third match point as Melzer hit a forehand into the net.

A relieved Nadal is now looking forward to his showdown with Soderling but knows it will be a tough test.

"Soderling is playing really well. I will go on court and do my best and if he beats me I will congratulate him. For sure, it will be a difficult match," he said in his post-match interview.

Saturday will see the women's singles final between Francesca Schiavone of Italy and Australia's Samantha Stosur, both playing in their first grand slam final.