Clijsters crashes out of pre-Wimbledon event 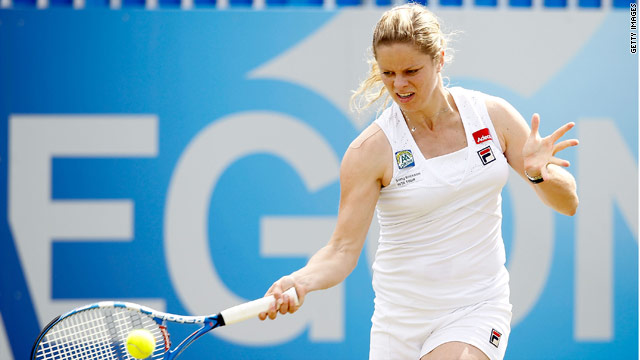 Clijsters plays a forehand return during her defeat to Azarenka at Eastbourne.
STORY HIGHLIGHTS

(CNN) -- U.S. Open champion Kim Clijsters crashed out in the quarterfinals of WTA tournament in Eastbourne as she went down in straight sets to Victoria Azarenka of the Belarus.

The world number nine is playing her first grass court tournament for four years in preparation for Wimbledon and had breezed through her opening two matches.

But a resurgent Azarenka showed she is coming back to her best form with a 7-6 6-4 win over the fifth seed.

Clijsters was up a break in the second set as she tried to level after losing the opener on a close tiebreak.

But the Belgian folded and lost the last four games to slip to a disappointing defeat.

"I was up 4-2 in the second set but a couple of double faults and some good returns from her pushed me back quickly from there," Clijsters told the official WTA Tour Web site.

"I wasn't able to dictate and she took risks on her second serve. I'm still happy with the first two matches here and with parts of this one as well."

Azarenka will next play Marion Bartoli after the French eighth seed reached the semifinals at the tournament for the fourth year in a row as she beat Spain's Maria-Jose Martinez Sanchez 5-7 6-4 7-6.

Stosur, beaten in the Roland Garros final by Francesca Schiavone, played a sloppy tiebreak to fall a set down, but then took total command to close out victory in a shade over two hours.

In other WTA Tour action, Clijsters' Belgian rival Justine Henin reached the semifinals of the S'Hertogenbosch tournament with a routine 7-5 6-3 win Kristina Barrois of Germany.