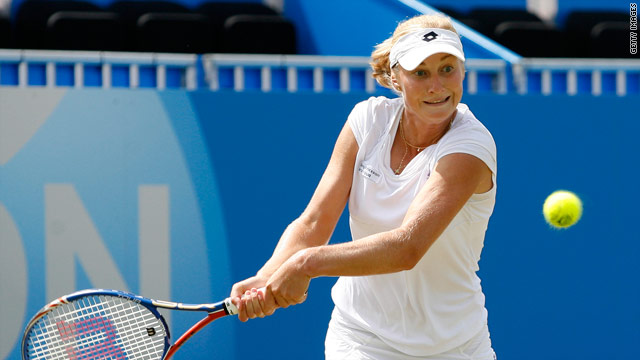 Makarova plays a return during her superb win over Stosur at Eastbourne.
STORY HIGHLIGHTS

(CNN) -- Unseeded pair Ekaterina Makarova and Victoria Azarenka will contest the final of the prestigious WTA tournament at Eastbourne after shock semifinal victories on Friday.

Meanwhile, in the UNICEF Open in the Netherlands, former world number one Justine Henin advanced to the final with a 6-2 6-2 victory over fifth seed Alexandra Dulgheru of Romania.

Belgian ace Henin is warming up for Wimbledon at the low-key event in Den Bosch while a clutch of leading players have been on the grass courts of Eastbourne on England's south coast.

This surface can be good for me, it's a matter of playing and winning more matches. I'm looking forward to playing another slam
--Samantha Stosur
RELATED TOPICS

Azarenka, who put out Henin's compatriot Kim Clijsters in the quarterfinals, will be playing in her second final of the season after losing out in Dubai to Venus Williams.

Her passage to Saturday's final is less of a surprise than that of Russian qualifier Makarova, who won a marathon first set, which was decided on a tiebreaker.

The second-set was also closely contested, with Australian Stosur saving two match points in the 12th game before 22-year-old Makarova converted on the third.

Despite her defeat, the powerful Stosur believes she can play well at Wimbledon on the grass.

"This surface can be good for me, it's a matter of playing and winning more matches. I'm looking forward to playing another slam," she told the official WTA website.

"I hope I can keep building from the French, plus I also had a good Aussie Open."

Makarova is the first qualifier to reach the final at Eastbourne since Vera Dushevina in 2005, where she was beaten by reigning U.S. Open champion Clijsters.