The sporting contests that never ended

By James Montague and Dean Walsh 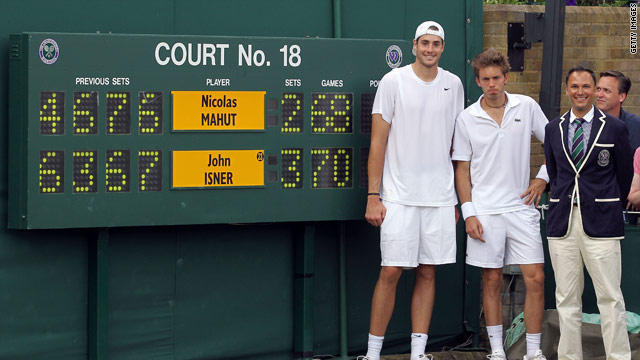 London, England (CNN) -- You can only imagine what they felt like when the woke up the next morning.

The epic final set between American John Isner and France's Nicolas Mahut at Wimbledon -- which finished 70 games to 68 Thursday -- has ripped up the game's record books. The set alone is longer than any match in Wimbledon's history.

But Isner and Mahut will have to go some way to match CNN's 10 epic sporting battles. They aren't playing with broken hands, after all...

Some people may balk at the brutality of boxing these days, but back in the 19th-century the sport was a vicious endurance match, where round limits were dismissed as the effeminate ramblings of molly coddled liberals. Nature would take its course and the weak would eventually succumb.

But when Andy Bowen and Jack Burke took to the ring at New York's Olympic Club in 1893, both men staggered on through 110 rounds of brutal pugilism.

By the end of the fight Burke had broken all the bones in both of his hands. His wrists were broken too. In the end, the referee declared a draw, telling the crowd that the men could split the purse having "earned their money".

Still, not everyone was happy. "There were thousands of people there, many of them laboring men," wrote the New York Times' boxing reporter. "And it was almost time for them to go to their breakfast. Men were asleep in their seats and the disgust was general."

The Namibian football league isn't renowned for producing many moments that reverberate around the world, but that changed after a Namibian Cup tie in 2005. When the cup holders FC Civics Windhoek took on KK Palace, the match ended in a 2-2 draw. It was time to decide the match by penalties. Designed as a quick -- if painful -- way of deciding a tie, it took 48 kicks to separate the teams.

In the end it was the underdog that prevailed, KK Palace squeezing through 17-16. Did Kunamuene feel he had just witnessed a little slice of footballing history? "We didn't think it was record but I am very proud," he told CNN. "But, really, at the end of the game everybody was more relieved than anything else."

By 4am, there were only 19 frozen fans left to watch the Pawtucket Red Sox and Rochester Red Wings play at the McCoy Stadium. The longest professional baseball game started with a crowd of 1,740 on a bitterly cold Saturday on April 18, 1981. It was so cold, in fact, that players in the dugout used broken bits of bats to start small fires to keep warm.

Fast forward to Easter morning and, after 882 pitches had been thrown, the president of the league, Harold Cooper, finally decided to call it quits following 32 innings and the match tied at two runs each. They may not have seen a winner, but those 19 fans at least saw history being made. 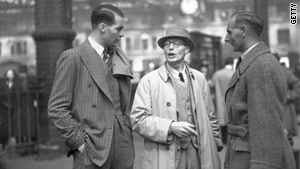 England cricketers return home in 1939 after their tour of South Africa -- and the sport's longest match.

Timeless tests existed once upon a time, and the last -- England versus South Africa at Durban in 1939 -- turned out to be the longest ever test match played.

For some, following the game became a tiresome ordeal, as one impatient fan told an English newspaper on day five: "Sir, No matter how important the match, batting of this dreary description can by no feat of imagination be called cricket. It is merely a certain cure for sleeplessness."

It lasted nine days, ending in an anti-climactic draw as England had to catch a boat home.

When the reigning world champion Anatoly Karpov sat down at the 1984 World Chess Championships to play the young, brash Garry Kasparov it was much more than a simple game of chess.

For many this epic, Cold War match-up defined the struggles between reformists and hardliners at the heart of the Soviet Union; the regime represented by Karpov, the reformists by the boy from Baku.

Little did they know that the match would last for months. Karpov quickly took a 3-0 lead before Kasparov decided on a different approach: grinding down his opponent.

Kasparov ground out 40 draws in a bid to tire his opponent until the match was abandoned at 5-3.

When six-time world squash open champion Jahangir Khan locked horns with Gamal Awad -- aka the 'Grasshopper' -- in 1983 at the Chichester Festival final in England, everyone anticipated an epic encounter. Little did they know that the two kings of the squash court would slug it out for 166 minutes, the longest match in the history of the sport.

The match was part of the longest winning streak in squash between 1981-86: Khan won 555 consecutive matches. Time magazine also named him as one of Asia's heroes over the past 60 years, with the magazine concluding: "If winning is everything, then Khan is the greatest. Period." 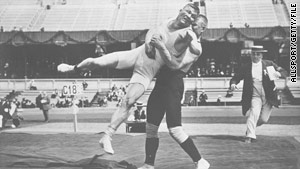 The most epic of sporting battles tend to have a political sub-plot, which was the case when Estonian wrestler Martin Klein (who had decided to represent Russia) met Finland's Alfred Asikainen at the 1912 Stockholm Olympics. Despite Russia having dominion over Finland, the Finnish were allowed to fly their own flag, much to the chagrin of the Russians.

So when the two wrestlers met in the semi-finals, neither wanted to let their respective motherlands down. Their 11 hour and 40 minute duel was almost inevitable. In the end it was the Russian who came out on top.

But it was a Pyrrhic victory: Klein was so exhausted he couldn't fight in the final the next day, automatically handing the gold medal to a Swedish wrestler. Asikainen, on the other hand, returned home a nationalist hero.

Polish table tennis legend Alex Ehrlich and his Romanian counterpart Paneth Farcas played out arguably one of the most astonishing points in any racket sport: the opening rally of their World Championship match lasted for two hours and twelve minutes, the ball crossing the net over 12,000 times.

With both players staunchly refusing to press for a winner, the International Table Tennis Federation held an emergency meeting whilst the point was being played. They returned to the match to find that Ehrlich had started a game of chess with his trainer whilst still playing the point.

The Pole won the point but the match was abandoned after the referee's neck locked. "But I have rook for knight and a winning position," Ehrlich drolly replied.

Alas, the Montreal Maroons are no longer with us but they have left an indelible mark on the NHL record books: they were part of the longest overtime in ice hockey history. Having played out three periods for no score, the game ran into overtime. And ran, and ran, and ran.

By the time Mud Bruneteau scored the winning goal, 116 minutes and 30 seconds of overtime had been played, a few minutes shy of an extra three games. The goal was no classic, either: such was the exhaustion of the players the puck meekly limped over the line.

When Cary Middlecoff and Lloyd "Mr Icicle" Mangrum finished on the same number of shots at the Motor City Open, the rules were clear: a sudden death playoff was in order.

But few could have predicted what happened next. The two golfers couldn't be separated, halving every hole on the front nine. By the time they had drawn the 11th, the authorities had had enough. The tournament was stopped and both were declared the victor.