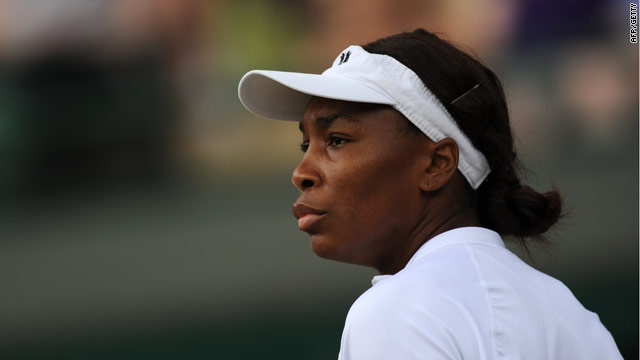 (CNN) -- Five-time champion Venus Williams sensationally crashed out in the quarterfinals of Wimbledon to unheralded Bulgarian Tsvetana Pironkova on Tuesday.

World number 82 Pironkova took advantage of erratic play by the second seed to win 6-2 6-3 in one hour 26 minutes. She is the first Bulgarian to make it to the semifinals at Wimbledon.

The shocks did not end there as U.S Open champion Kim Clijsters went out to Russian Vera Zvonareva in their quarterfinal match.

She beat the Belgian ace for the first time in her career, coming back from a set down to put out the eighth seed 3-6 6-4 6-2 on Centre Court.

But top seed Serena Williams avoided further upsets as she beat Li Na of China 7-5 6-3 to reach the quarterfinals.

Ninth seed Li pressed the defending champion in the opener, but lost her service in the 11th game, having been 40 love up. Williams served out for the opening set and a single break in the next was enough to secure victory.

Earlier on Court One, Pironkova saw two match points slip away on the American's serve as she led 5-2 in the second set but made no mistake when she served for the match.

Holding two match points at 40-15, Williams put a volley wide and her opponent sunk to the turf in celebration.

But Pirinkova had a previous grand slam win over the elder of the Williams sisters dating back to the first round of the Australian Open in 2006 and never doubted her ability.

"I had one win over here and thought I could win it and was going for it," she told BBC Sport.

Despite that earlier victory, it was still a massive upset as Williams has reached the last three women's singles finals at the All England Club and was seeded to meet her sister Serena this time around.

She was always in trouble after losing the first set having been broken twice and Pirinkova, who put out 2007 runner-up Marion Bartoli in the fourth round, did not let up in the second.

She now plays Zvonareva in the last four after the 21st seed shrugged off her reputation for not playing her best in tight matches to knock out the more favored Clijsters.

After falling a set down, Zvonareva broke twice in the second to level at a set apiece.

Growing in confidence, she made further inroads against the Clijsters' serve in the fourth game of the deciding set and continued to hold her own service.

Zvonareva then forced two match points on Clijsters' serve in the eighth game.

The Belgian saved one after a long rally but then hit into the net on the next to give Zvonareva the best victory of her career.

The Russian told BBC Sport: "It's definitely one of my dreams to be playing here in the semifinals. I remember as a kid watching Wimbledon on TV."

It was Clijsters' first appearance at the Wimbedon since 2006 and having put out arch-rival Justine Henin in the fourth round looked set to improve on her two previous best performances when she reached the semifinals.

Kvitova had never previously won at Wimbledon before this year and she saved five match points before battling back from 5-2 down in the deciding set to triumph 4-6 7-6 8-6 in two hours and 38 minutes.