Venus and Serena out of Wimbledon doubles 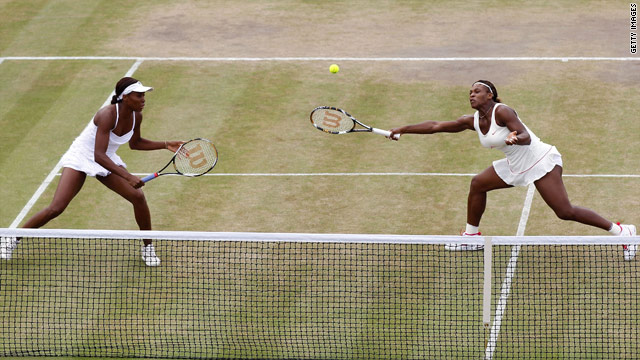 (CNN) -- Venus and Serena Williams' bid for a fifth consecutive Grand Slam doubles title ended when they were beaten in the Wimbledon quarterfinals.

The defending champions were beaten 3-6 6-3 6-4 by Russian pair Elena Vesnina and Vera Zvonareva -- their first defeat at the championships since 2003.

Zvonareva could potentially meet Serena in the single's final if both win their semifinals on Thursday. The Russian plays Tsvetana Pironkova, from Bulgaria, who beat Venus on Tuesday.

Serena is due to play unseeded Czech Petra Kvitova.

The Williams' sisters raced through the opening set but were pegged back by their Russian opponents in the second.

Zvonareva and Vesnina broke early in the deciding set and never looked back as they powered into the final four.

It means Wimbledon is over for Venus -- the first time she will leave the All England Club in London without a trophy since 2006.

During the last three years the sisters have only been beaten five times in 60 matches and only twice in 29 matches at Wimbledon.

Venus and Serena became the top ranked female doubles pair in the world after winning the French Open in Paris earlier this month.