Injured Henin ruled out of U.S. Open and battle of Belgians 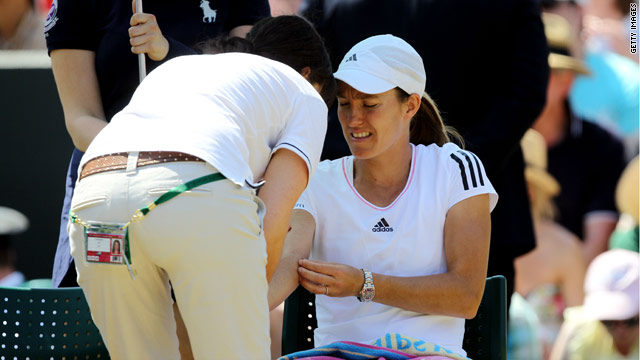 Justine Henin receives treatment on her elbow during her match with Kim Clijsters.
STORY HIGHLIGHTS

(CNN) -- Former world number one Justine Henin has ruled herself out of the U.S. Open after sustaining an elbow injury in her Wimbledon exit to Belgian rival Kim Clijsters.

It is a shattering blow for Henin, who will also miss her 'Best of Belgium' clash with Clijsters in Brussels on July 8.

Henin, who made her comeback to competitive tennis at the start of the year after 18 months in retirement, picked up the injury during her fourth round defeat to Clijsters.

She suffered the injury when falling early in the first set, but bravely played on in a match that lasted three sets.

Henin confirmed the news in a statement on her personal website.

"Following my fall at Wimbledon....I took several medical examinations which have revealed a ligament partial fracture at the right elbow," it read.

"There I regret to announce that I can't unfortunately play in Best of Belgium this July 8. I'll be nevertheless present for this wonderful Belgian event which is important for me.

"This injury will keep me away from the courts during a rough period of two months with the consequence the withdrawal of my U.S. round of tournaments, including the US Open."

The 28-year-old added that she will undergo further medical examinations to decide on when she returns to the WTA Tour later this season.

Aside from missing the final grand slam of the year, Henin's exhibition head to head against Clijsters was set to attract a world record crowd of 40,000 for a tennis match.

Organizers say they plan to find a replacement player for Henin, who has been beaten three times by Cljisters since her return to action.

Clijsters was later beaten by Vera Zvonareva in the quarterfinals at Wimbledon, leaving both of the Belgian stars still searching for their first grand slam title at SW19.

The U.S. Open begins on August 30 in New York, where Clijsters will be defending the crown she won in sensational fashion in her comeback year in 2009.