Nadal thrashes Murray to set up final against Berdych 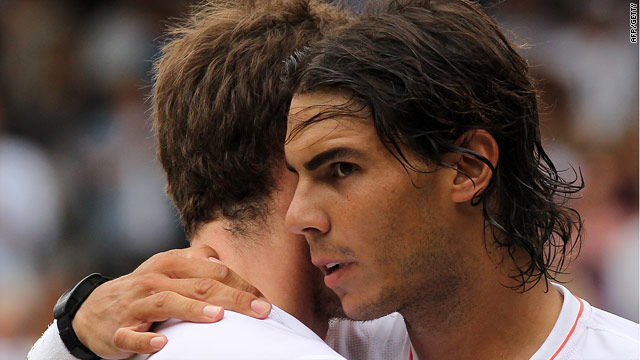 (CNN) -- World number one Rafael Nadal ended the Wimbledon dream of home hope Andy Murray with a straight sets victory in their semifinal on Centre Court on Friday.

He will play Czech Tomas Berdych in Sunday's final as he bids for a second Wimbledon crown and his eighth grand slam title.

Earlier, Berdych also had a convincing straight sets victory over Novak Djokovic of Serbia in their semifinal.

12th seed Berdych had beaten defending champion Roger Federer in the quarterfinals and maintained his superlative form with a 6-3 7-6 6-3 victory over the third seed.

But Nadal, who swept past Murray 6-4 7-6 6-4, will be a formidable opponent at the peak of his powers, having regained his French Open title last month.

A single break of service was enough to give the Spaniard the opening set but the Scot had his chance in the second set tiebreak.

A double fault by Nadal gave him set point on his service at 6-5, but he could not take it as the second seed seized on his second delivery.

Nadal then closed out the tiebreaker and with a two sets to love lead looked impregnable.

Murray gained an early break in the third set, but once Nadal had retrieved it to level at 4-4 it was one-way traffic.

He held service for 5-4 and then pressured Murray into a forehand volley error at the net on his second match point.

The victory extended his winning run at Wimbledon to 13 matches having won the title in 2008, but was unable to defend in last year through injury.

The ever-sporting Nadal revealed he said "sorry" to his opponent as he consoled him at the net.

"I said sorry and wished him the best of luck for the rest of the season," he told BBC Sport.

"I think he deserves to win a grand slam.

The 24-year-old Berdych is also in a purple patch having reached the semifinals of the French Open at Roland Garros and he proved too hot to handle for third seed Djokovic.

"It is a dream to be in the final of any grand slam and if you can reach it, Wimbledon is the top one.

"This is definitely the biggest tournament for me. Now I will try to do the same as I did after the Federer win and enjoy the feeling of victory."

A sporting Djokovic conceded: "I was nervous, there is no question about it. I didn't feel great on the court. I don't know why.

"But he played a great match and a great tournament. He was just the better player on the court."

Djokovic, who won the Australian Open in 2008, was broken in the sixth game of the opening set and looked in deep trouble as he lost his service again at 5-5 in the second.

Berdych served for a two sets to love lead, but nerves got the better of him and Djokovic broke back to force a tiebreak.

The big Czech opened up a 6-2 lead in the breaker, but Djokovic saved all four set points before having opportunities of his own to level.

But Berdych kept his nerve and a double-fault by the Serbian gifted him a two sets to love lead.

There was no way back for a dispirited Djokovic and a single break in the third set saw Berdych home for a memorable victory.