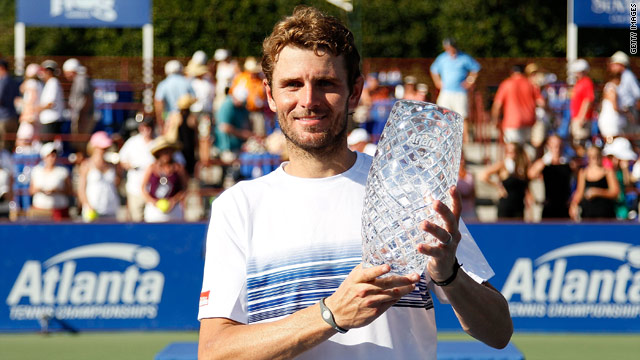 Mardy Fish continued his winning streak on the ATP Tour with victory over John Isner in Atlanta.
STORY HIGHLIGHTS

(CNN) -- American Mardy Fish claimed his second successive tournament victory, extending his winning run to 10 matches in the process, with a hard-fought three-set triumph over compatriot John Isner in the final of the Atlanta Tennis Championships on Sunday.

The 28-year-old maintained the best form of his career as he came from behind to defeat Isner -- who famously played out the longest tennis match in history at Wimbledon last month -- 4-6 6-4 7-6.

Fish, who adds the Atlanta title to his success in Newport two weeks ago, also reached the final at Queen's Club, losing to Sam Querrey, meaning he has now progressed to the final in three of his last four ATP ranking tournaments.

This is as top as I've ever been in my career.
--Mardy Fish
RELATED TOPICS

Fish, who disposed of top seed Andy Roddick in the last four and who hadn't dropped a set on his way to the final, lost the opening set when Isner claimed the break.

But Fish broke his opponent twice in three games to level the score at 1-1 before both players broke each other's serve prior to the decisive set going to a tie-break -- which Fish won after taking the opening four points.

"This is the third final this year that arguably I could have won," Isner told the official ATP Tour website.

"I lost two finals earlier this year when I was up in both of them, one of them I was serving on match point. This one could've gone either way as well and it is very disappointing.