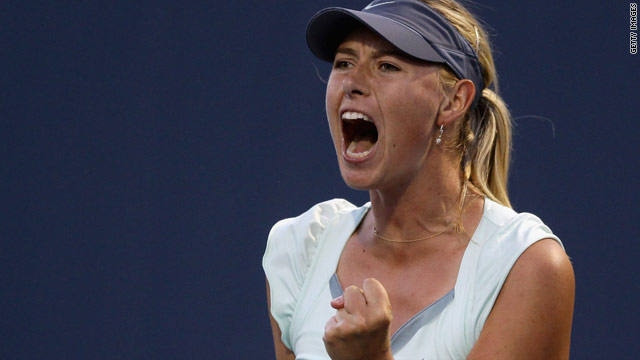 Maria Sharapova made a successful return to hard-court action with victory in her opening game at Stanford.
STORY HIGHLIGHTS

(CNN) -- Former world No. 1 Maria Sharapova gained revenge over China's Zheng Jie as she reached the second round of the Bank of the West Classic in Stanford.

The Russian fifth seed lost to Zheng in her previous hard-court outing three months ago, but triumphed 6-4 7-5 on her return to the surface on Tuesday night at the oldest women-only event on the tennis calendar.

Sharapova reached the quarterfinals of the American tournament last year as she continued her slow recovery from shoulder surgery, and made a solid start to her preparations for this year's U.S. Open by beating the world No. 23.

The 23-year-old will next play unseeded Olga Govortsova of Belarus.

Improving with every match is really the goal, and working myself towards the U.S. Open
--Maria Sharapova
RELATED TOPICS

"Our match at Indian Wells was a really scratchy match. I wasn't playing very well there," Sharapova told the WTA Tour website.

"Today I served really well but returned quite poorly. I returned well when I had to, but I'll work on that going forward. Improving with every match is really the goal, and working myself towards the Open."

"I'm desperate to be back in the final of a Grand Slam. That's my main goal," said French fourth seed Bartoli, the 2007 Wimbledon runner-up. "My second goal is to have a one digit ranking, but that will come with my results."

American teen Melanie Oudin, who upset Sharapova during her dream run to the U.S. Open quarterfinals last year, managed a remarkable escape in her match against Aleksandra Wozniak.

Israeli sixth seed Shahar Peer and No. 7 Yanina Wickmayer of Belgium also went through, and will next play Russian Maria Kirilenko and Slovakia's Dominika Cibulkova respectively.