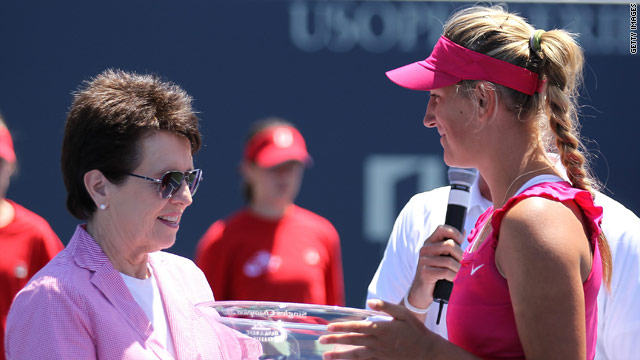 Victoria Azarenka of Belarus thrashed former world number one Maria Sharapova 6-4 6-1 in the final of the WTA tournament in Stanford to win her first title of the year.

The eighth seed, who celebrated her 21st birthday the day before Sunday's final, joked about her age after dispatching the Russian superstar in California.

"I haven't lost a match yet since I turned 21," Azarenka told the official WTA website.

Azarenka broke the fifth seed three times in a topsy-turvy first set and then breezed through the second as Sharapova made a string of unforced errors.

I haven't lost a match yet since I turned 21. It's great. I can have cake now
RELATED TOPICS

Her four WTA career titles have all come on hard courts and she will now move to number 12 in the world, one place ahead of Sharapova, who was bidding for her third title of the season.

"It just brings me so much confidence and passion to go, especially before the U.S. Open," Azarenka added

"I'm glad I'm picking up my form and gaining so much confidence."

Sharapova is working her way up the rankings after shoulder surgery last year and admitted she had gifted Azarenka victory with her sloppy second set display.

"I started making unforced errors off her returns and she stepped it up, took advantage and started to get on a roll," Sharapova said.

"I don't think I served that smart. I need a higher percentage of first serves, in general and particularly against her."

The tournament at Stanford is the oldest women's only event on the circuit and an important warm-up ahead of this month's U.S. Open at Flushing Meadows.