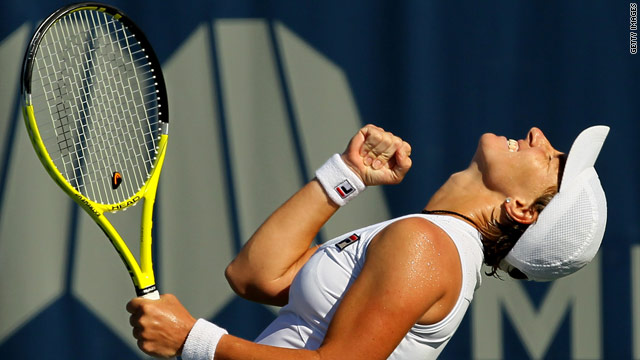 (CNN) -- Unseeded Svetlana Kuznetsova claimed her first singles title in over a year after battling past Agnieszka Radwanska in the final of the Mercury Insurance Open.

Kuznetsova, from Russia, took two and a half hours to beat her Polish opponent 6-4 6-7 6-3, just a month after she slipped out of the top 20 for the first time in six years.

In a seesaw battle, Kuznetsova squandered four match points in the second set as Radwanska forced the match into a decider but the Russian regained her superiority to close the match out.

Kuznetsova has two Grand Slam titles to her name, but hadn't appeared in the final of any tournament since Beijing in October in 2009, when she beat Radwanska 6-2 6-4.

The 25-year-old was looking to record her 13th career title and started confidently in San Diego, breaking her opponent to secure the first set.

It was a big relief to win, because it had been such a long time since my last title.
--Svetlana Kuznetsova
RELATED TOPICS

But Radwanska hit back in the second set, ensuring a tie-break and saving four championship points to take the match into a final set.

But more assured serving meant Kuznetsova reasserted her control in the third to once again deny Radwanska and she leapt to 14th when the world rankings were released on Monday.

After her victory Kuznetsova told the official WTA website: "I had my advantages in the second set and it was very hard to forget them, but I started all over again. I had to be stronger. I believe I am, and I proved it.

"It was a big relief to win, because it had been such a long time since my last title, also because of losing the second set like that."

Radwanska also enjoyed a bounce in the rankings - climbing a place from tenth to ninth.

She the official WTA website: "It's always disappointing to lose a match, especially a final, but in the important moments at the end she was better.

"She started playing better and more consistently in the third. I had chances but didn't use them."