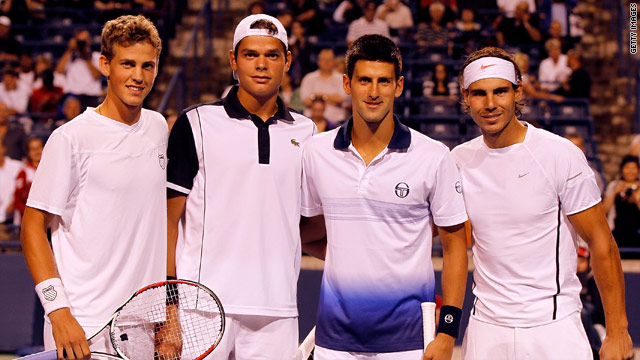 (CNN) -- Rafael Nadal and Novak Djokovic were billed as a tennis "Dream Team" but they ended up suffering a nightmare.

The top two players in the world rankings, forming a doubles pair for the first time, slumped to defeat in the first round of the Rogers Cup in Toronto.

Nadal, the Spanish world number one, and Djokovic, the number two from Serbia, were beaten 5-7, 6-3, 10-8 by Canadian wildcards Vasek Pospisil and Milos Raonic.

It was the first time in 34 years that the top two players in the men's world rankings have joined forces in doubles.

In 1976, American duo Jimmy Connors and Arthur Ashe reached a quarterfinal and a final in their two outings together.

But Nadal and Djokovic were less successful on their debut. After losing the first set to their more illustrious opponents, Pospisil and Raonic squared the match by winning the last three games of the second.

They raced into a 4-0 lead in the Match Tie-Break and eventually won it 10-8 after Nadal and Djokovic had saved three match points.

The defeat highlights the different skills required for success in doubles and singles. The Williams sisters, Serena and Venus, are a rare example of two top singles players who have enjoyed grand slam success as a doubles pair.

Nadal and Djokovic will now turn their attention to the singles competition in Toronto as they step up their preparations for the U.S. Open, the fourth and final grand slam of the year, at the end of August.