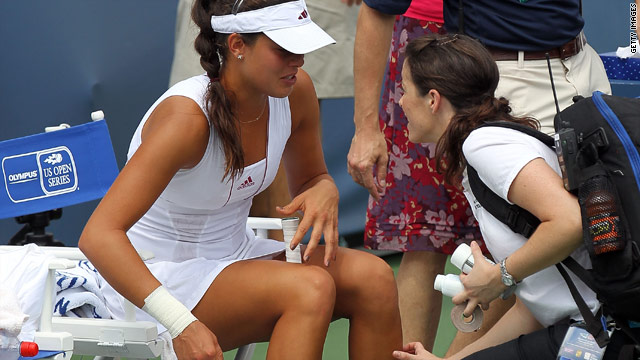 (CNN) -- Kim Clijsters will play Maria Sharapova in the final of the WTA tournament in Cincinnati after both had contrasting semifinal victories.

Fourth seed Clijsters was leading 2-1 in the opening set of her last four match when fellow former world number one Ana Ivanovic withdrew.

10th seed Sharapova had to battle for two and a half hours to beat fellow Russian Anastasia Pavlyuchenkova 6-4 3-6 6-2 in their later night match.

Belgian ace Clijsters is 4-3 ahead in career meetings with Sharapova and both will be bidding for a season-leading third title of the season on Sunday.

Ivanovic will be hoping that the injury does not ruin her chances of continuing her improvement at next month's U.S. Open in New York, the final grand slam event of the tennis year.

"I was very scared. All of a sudden on that one shot, I felt something crack a little bit," she told reporters.

"Just on that one forehand when I went to step around it, I just felt like pain all of a sudden, so much pain in my foot and I couldn't step on it anymore.

"I tried a bit of tape, but I could not put any weight on it and there was no point in me continuing."

The 22-year-old, who before this week had won back-to-back matches only twice this year in reaching the semifinals in Brisbane and Rome, was seeking to reach her first final since Indian Wells in March 2009.

After almost being knocked out in the opening round of the hardcourt event, she had few problems in winning her next two matches and then on Friday won her quarterfinal against Uzbekistan's Akgul Amanmuradova, who earlier upset top seed Jelena Jankovic.

"It was nice to see her do well this week, and then something like that happens."

Sharapova, who has had her share of injury problems, will be bidding to add to her titles in Memphis and Strasbourg as she moves up the rankings.