Clijsters battling to be fit for U.S. Open 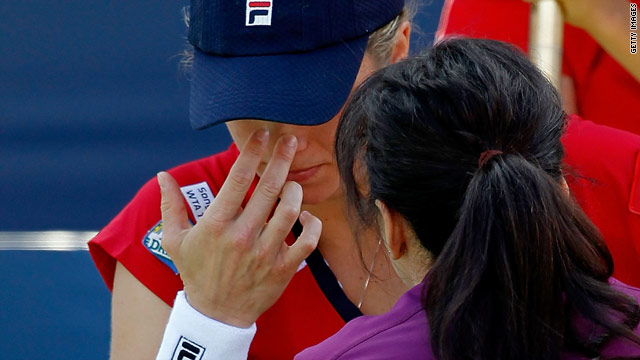 Clijsters receives treatment on her injured thigh during her quarterfinal loss in Montreal to Vera Zvonareva.
STORY HIGHLIGHTS

(CNN) -- Kim Clijsters will undergo a scan on her injured thigh Monday in the countdown to her title defense at next week's U.S. Open in New York.

The Belgian ace picked up the injury during her defeat to Vera Zvonareva in Montreal last week, leading to speculation she would be unable to play in the final grand slam of the season.

Heavily strapped, she lost nine straight games to Zvonareva in their quarterfinal clash having taken the opening set.

It was her second straight defeat to the Russian, who knocked her out of Wimbledon at the quarterfinal stage.

Clijsters is renowned for her fighting qualities and battled to the end in Canada despite the injury.

I don't like to give up
--Kim Clijsters
RELATED TOPICS

"If something really bad happens, if you twist your ankle. But I was still able to move, still able to hit the ball, so I don't believe in giving up."

The Montreal tournament is still to be completed after two rain-hit days, with Zvonareva yet to play her semifinal against Victoria Azarenka.

Caroline Wozniacki is due to play 11th seed Svetlana Kuznetsova in the other last-four clash Monday.

Wozniacki will be top seed in the U.S. Open after the withdrawal of world number one Serena Williams with a foot injury.

Clijsters is set to be seeded third for the defense of the title she won in such thrilling fashion last year on her comeback to tennis -- should she suffer no reaction to her injury.

Reports Monday in the Belgian media, said the former world number one was confident of playing in the final grand slam of the year, despite the scan to check for more serious muscle damage.

"I am in no doubt over my participation in the U.S. Open," AFP quoted Clijsters in the reports.

"I will likely have some strapping on my leg but that does not mean that I will not be at full fitness."