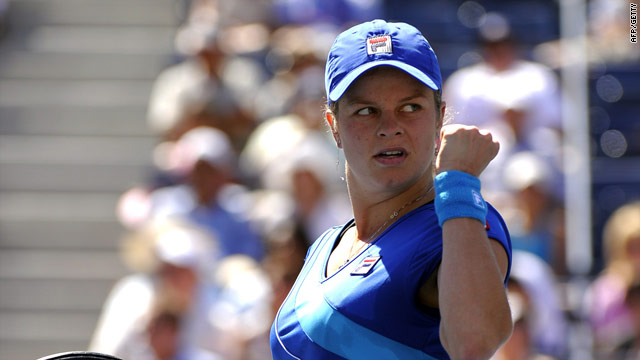 Clijsters signals victory in her first round match at Flushing Meadows against Greta Arn.
STORY HIGHLIGHTS

(CNN) -- Kim Clijsters survived a second set scare to begin the defense of her women's singles title at the U.S. Open with a straight sets 6-0 7-5 victory over Hungarian Greta Arn on Monday.

The second seed raced through the opener on the Arthur Ashe Stadium Court without losing a game, but quickly fell two breaks down in the second set.

Arn served for the set at 5-4 before a series of thumping forehands set up two break points for the Belgian.

The 31-year-old Arn saved the first after a storming rally, but Clijsters made now mistake on the second to retrieve the second break.

She duly went 6-5 ahead and put Arn under immediate pressure on her own service again.

Two match points were bravely saved, but Clijsters claimed victory on the third after just over an hour.

It was her 15th straight win at Flushing Meadows, having won the title in 2005 before injury prevented her making a title defense.

Following a two-year retirement and giving birth to her first child, Clijsters returned to win the 2009 U.S. Open in thrilling style.

A pre-tournament injury scare appeared not to bother the 27-year-old who will next plays Australia's Sally Peers for a place in the third round.

"I knew when I was down a double break I needed to be more aggressive and take control of the rallies," Clijsters told Sky Sports after her victory.

Meanwhile, two-time U.S. Open champion Venus Williams had an easier passage to the second round at Flushing Meadows with a straight sets victory over Italy's Roberta Vinci 6-4 6-1.

Williams showed little sign of the knee injury that has prevented her from playing since Wimbledon, and will now face Canada's Rebecca Marino in the next round.

In other first day action from the final grand slam of the season, this year's French Open champion, Francesca Schiavone of Italy, crushed Japan's Ayumi Morita 6-1 6-0 in just 58 minutes.

The 30-year-old Schiavone has made little impression since her upset win in Paris in June, but told AFP that she was now coming to terms with her surprise success.

"When you try to reach in the top of the mountain, then you can't go more up. So you have to go down and come back up again.

"I think I am doing this one. And when it's time to come back up again, I will do it. I'm working to do it."

Russia's Elena Dementieva, the 2004 runner-up and 12th seed was also an impressive winner.

She beat Olga Govortsova of Belarus 6-1 6-2, while home home Melanie Oudin reached the second round with a 6-3 6-0 win over Olga Savchuk of Ukraine.

Oudin knocked out Maria Sharapova at last year's U.S. Open but has struggled to repeat that success in regular WTA Tour action.

Russia's Dinara Safina was the biggest first round casualty from the women's draw. The former world number one lost in straight sets to Slovakian 24th seed Daniella Hantuchova 6-3 6-4.

Safina has slipped 49 places in the world rankings in the last 12 months following a lower back injury. Hantuchova will now play American Vania King for a place in the third round.