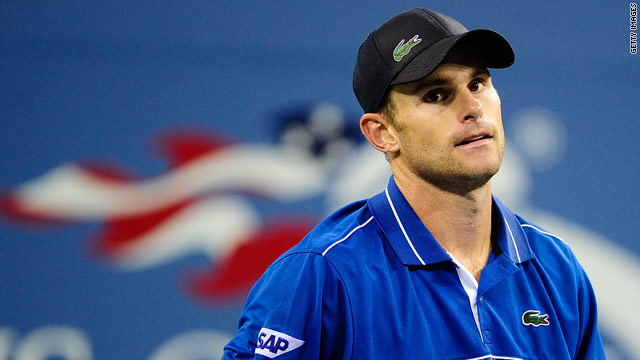 (CNN) -- An irate Andy Roddick crashed out of his home grand slam at Flushing Meadows, New York after suffering a second-round defeat to Serb Janko Tipsarevic.

The ninth seed -- who was seeking to claim his second U.S. Open title -- lost 3-6 7-5 6-3 7-6 (7-4) in a tightly fought match which saw the American deliver an angry outburst to a line judge after a foot fault was called on one of his serves.

Despite winning the first set, Roddick lost control of the night match, as Tipsarevic increasingly dominated with some aggressive shot-making.

Roddick admitted after the match that he had let the decision of the line judge affect his game: "I wasn't upset with the call, I just expect my umpires to know their left foot from the right foot.

"If I ask what [did I do?] And I point to my right foot and she says 'yes it was that one' ... that's impossible, find me any tape from my career when my right foot has landed ahead of my left foot on a serve," the 28-year-old told reporters at a post-match press conference.

"The stubbornness ... I let mine get in the way. I got called for two others after that and have no issue with it. In the moment I was just stupefied.

"It's the fact I couldn't get her to admit it wasn't the right foot which infuriated me, the lack of common sense was unbelievable to me. It was probably a correctable mistake and I let it get to me more than I should have," Roddick added.

Tipsarevic said he was proud of a win in what he rated as a good game: "At Wimbledon, when I won, I felt that I was lucky and that Andy choked at important moments. But here, I feel it was a different story. From my point of view, it was a high quality match."

Elsewhere, number four seed Andy Murray breezed into the second round of the U.S. Open but Wimbledon finalist Thomas Berdych fell at the first hurdle in sweltering conditions.

As temperatures on court neared 100 degrees Fahrenheit, Murray breezed past Slovakian Lukas Lacko 6-3 6-2 6-2 in one hour and 51 minutes, to save himself a lengthy session in the blazing sun.

But Berdych, the number seven seed, became the first big casualty of the tournament as he struggled with the heat on his way to a straight sets defeat at the hands of Frenchman Michael Llodra 7-6 6-4 6-4.

Murray gave an impressive display, maintaining a good first serve percentage throughout the match and hitting some fierce winners, as he aims to go one better than last year when he lost in the final to Roger Federer.

After a few sloppy games in the opening set Murray broke Lacko's serve and didn't give his opponent any chances on his own.

The two players traded breaks of serve early in the second set, before Murray took complete control to close out the match and book a second round clash with Dustin Brown, after the Jamaican beat Ruben Ramirez Hidalgo.

Afterwards Murray told reporters: "I managed to get through in straight sets so I'm pleased, but it was a lot tougher than the score suggests.

"Everyone in my box always tells me it's a lot tougher watching in the heat than playing but I'm not so sure. They were brutal conditions."

Berdych was stunned by doubles specialist Llodra, who took the opening set of their match on a tie-break.

The Czech, ranked world number seven, looked as though he may escape a defeat when Llodra fell awkwardly in the second set and had to call for the trainer.

But the Frenchman retained his grip on the match after treatment to cause the first big upset in New York.