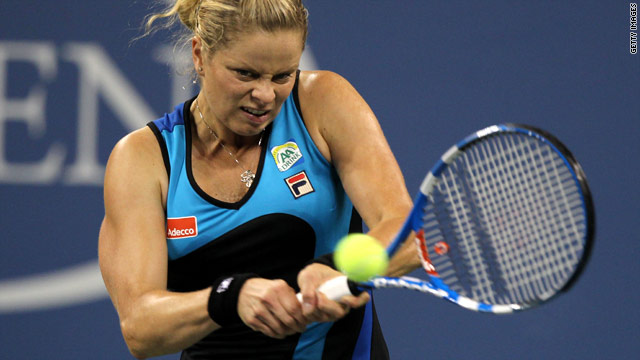 Defending U.S. Open champion Kim Clijsters wasted no time in securing her place in the third round at Flushing Meadows.
STORY HIGHLIGHTS

(CNN) -- Defending U.S. Open champion Kim Clijsters stormed past Australia's Sally Peers in a comfortable straight sets victory, taking less than an hour to secure her place in the third round in New York.

Peers held her serve just once in the match, and Clijsters, a two-time winner at Flushing Meadows, will now face Petra Kvitova on Friday after her 6-2 6-1 win.

Speaking at a post-match press conference, the Belgian second seed said: "Obviously I'm satisfied that I've got through, but the level definitely has to become better.

"I have to find that good feeling where I can, without thinking too much, play freely, move freely.

"I'm probably thinking a little too much out there, but you need that first so you can push yourself to get that good feeling back. I'm just waiting for it to get there."

Tenth seed Victoria Azarenka retired from her second round match after collapsing in soaring temperatures.

I have to find that good feeling where I can, without thinking too much, play freely, move freely
--Kim Clijsters
RELATED TOPICS

Azarenka, from Belarus, was trailing 5-1 in the opening set of her match against Argentina's Gisela Dulko in temperatures of nearly 100 degrees Fahrenheit when she crouched down after a rally.

Seconds later she slumped to the floor as medics rushed out to treat her before she was taken from the court in a wheelchair, but Azarenka later said she was suffering from concussion.

In a statement on the WTA Tour's official website she said: "I was warming up in the gym prior to my match against Gisela Dulko when I fell while running a sprint. I fell forward and hit my arm and head.

"I was checked by the medical team before I went on court and they were courtside for monitoring. I felt worse as the match went on, having a headache and feeling dizzy.

"I also started having trouble seeing and felt weak before I fell. I was taken to the hospital for some medical tests and have been diagnosed with a mild concussion."

Elsewhere, third seed Venus Williams progressed to round three but was made to work hard by Grand Slam debutante Rebecca Marino, from Canada, in a 7-6 6-3 win.

Williams, playing in her first tournament since Wimbledon, toiled in the opening set but managed to prevail 7-3 in the tie-break.

She rediscovered her form in the second set, breaking in the fourth game before going on to seal the match.

In an all Australian affair, fifth seed Samantha Stosur saw off the challenge of Anastasia Rodionova, winning the contest 6-1 6-4.