Holder Clijsters powers into third round 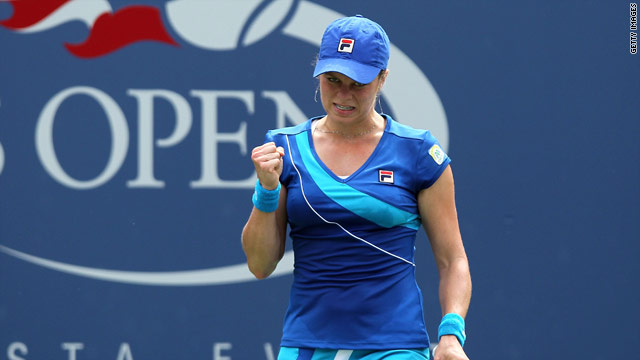 Kim Clijsters remains on course to retain her U.S. Open title after cruising into the third round on Friday.
STORY HIGHLIGHTS

(CNN) -- Defending champion Kim Clijsters marched into the third round of the U.S. Open at Flushing Meadows as Hurricane Earl threatened to disrupt play on Friday.

The Belgian overcame a sticky start by winning 12 games in a row to see off 27th-seeded Czech Petra Kvitova, who reached the Wimbledon semifinals, 6-3 6-0.

"I am happy to have my match done before the storm comes, if it does come," the second seed told the official WTA Tour website.

"Now I can go back and play with my daughter Jada in the hotel while everyone else battles it out here."

Joining Clijsters in the last eight was Russian Elena Dementieva, who was given a tougher test by 24th seed Daniela Hantuchova.

"I did not want to lose that first set, I was just trying to fight for every point and that was the key for the match," said Dementieva.

Fifth seed Samantha Stosur also managed to finish her match before the threat of bad weather.

And there was a comfortable victory for 20th seed Anastasia Pavlyuchenkova, who proved too classy for Gisela Dulko of Argentina, winning 6-1 6-2.