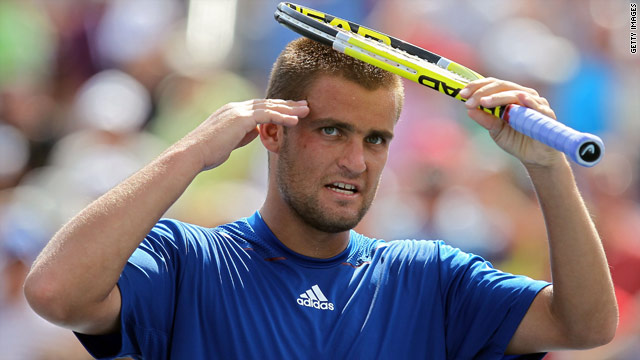 (CNN) -- Mikhail Youzhny booked his place in the last eight of the U.S. Open for only the second time as he saw off the challenge of Spain's Tommy Robredo, while Rafael Nadal breezed into the quarterfinals.

Youzhny also beat Robredo at this stage in the 2006 U.S. Open and fired 50 winners on his way to victory.

The first set went with serve until the eleventh game when Youzhny broke Robredo and held his own to take it 7-5.

Youzhny gained a quick break at the start of the second set causing his opponent to smash his racquet on the floor in frustration. He quickly wrapped it up 6-2.

Robredo hit back in the third set and secured it with a solitary break of serve, but normal service was resumed in the fourth as the Russian took it by the same margin.

Youzhny will play Switzerland's Stanislas Wawrinka in the quarterfinal after he beat American Sam Querrey in an epic encounter.

Wawrinka finally triumphed 7-6 6-7 7-5 4-6 6-3 in a match that lasted four hours and 28 minutes. His win means there are no more American players left in the men's singles draw.

Nadal did not begin his clash with fellow Spaniard Feliciano Lopez until after 11pm New York time, but the world number one wrapped up a 6-3 6-4 6-4 victory in just over two hours.

"To be in the quarterfinals of the US Open without lose a set and without lose a serve, two things must work really well: the concentration and the serve," Nadal told the U.S. Open website.

"I think I am playing better and better every day, and I had to play a little bit better this match."

Nadal, who is still to lose his serve in the tournament, will face another Spaniard Fernando Verdasco in the next round.