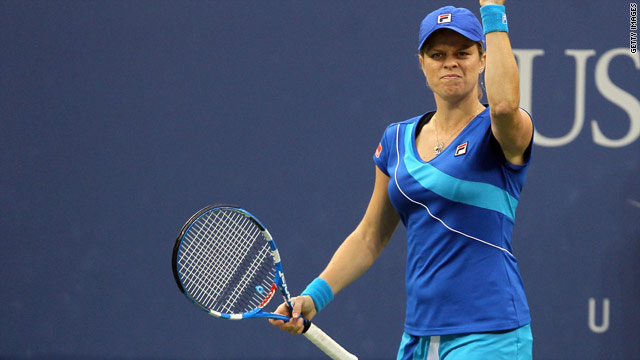 Clijsters: "I think today was probably one of the best matches that I've played throughout the tournament."
STORY HIGHLIGHTS

(CNN) -- Kim Clijsters willl face Vera Zvonareva in the women's final at the U.S. Open after the Belgian defending champion rallied from a set down to beat Venus Williams.

But No. 2 seed Clijsters gradually asserted her dominance to claim her fifth straight hardcourt win over the American, 4-6, 7-6, 6-4.

"It obviously means a lot to be in the final and to give myself a chance to defend my title from last year. It's a great opportunity," Clijsters said.

"But obviously beating Venus here last year and this year, it's a good feeling. I think today was probably one of the best matches that I've played throughout the tournament."

The Russian, who reached the final at Wimbledon only to lose to Serena Williams, repeated that feat at Flushing Meadows, winning 6-4, 6-3 in an impressive display.

Wozniacki reached the final herself last year, where she lost to Belgian Clijsters, and Zvonareva admitted she had to play at her best to get through.

I was patient and aggressive like in my previous matches.
--Vera Zvonareva
RELATED TOPICS

The 26-year-old told the official WTA Tour website: "It was tough as Caroline was in the final last year and she is a great player, but I was patient and aggressive like in my previous matches.

"It was a great experience at Wimbledon but it's something that is in the past for me now and I am trying to look forward."

Wozniacki came into the match on the back of a 13-match winning streak and she said: "Vera was not missing and going for her shots and most were going in.

"I had chances and I made some mistakes that I usually don't do. It was a tough day for me at the office but I just need to learn from this," added the 20-year-old Dane.