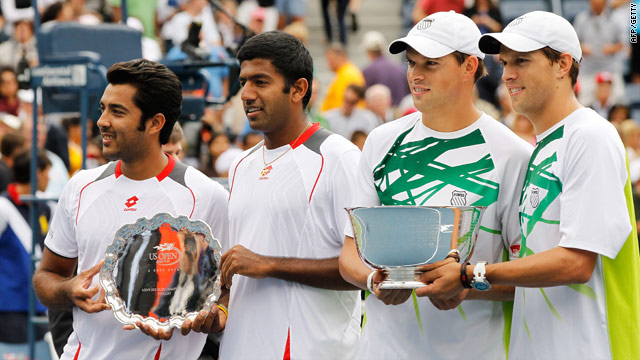 The unlikely pairing of an Indian and a Pakistani, nicknamed the "Indo-Pak Express" had captured imaginations around the world.

"I think they are a great front-running team," Mike said of their opponents.

Bopanna and Qureshi had yet to drop a set as they entered their first-ever Grand Slam final.

But the two-time U.S. Open champions put an end to that streak in a tightly contested and highly entertaining match, which was played in a packed Arthur Ashe Stadium.

"The Indo-Pak Express was rolling pretty well until we met these guys," Qureshi said in the post-match trophy ceremony.

Bopanna, of India, and Qureshi, of Pakistan, have been the story of the tournament. En route to the final, they took out two seeded teams, including a 6-3, 6-4 win over No. 2 seeds Daniel Nestor and Nenad Zimonjic.

After the match, Qureshi thanked the Bryan brothers for their generous donation to help the flood victims in Pakistan.