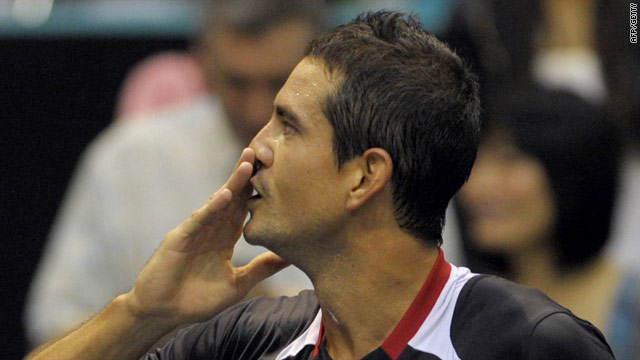 Garcia-Lopez was adding to the title he won in Kitzbuehel in 2009.
STORY HIGHLIGHTS

The world number 53 admitted to be struggling with leg and back pain after his momentous triumph against Nadal, but still managed a 6-4 3-6 6-4 victory to win his second ATP Tour title.

The decisive moment came in the 10th game of the deciding set as Garcia-Lopez broke Nieminen's resistance, but not before the Finn had saved match points.

"I didn't know how it would be on the court for me," Garcia-Lopez told the ATP Tour website.

"It was so tough against Nadal, I didn't know what my condition would be.

"Jarkko played tough, there were just small differences at the end. I'm really pleased with how I served and fought. Both this match and the one against Nadal were difficult for me."

He is the eighth different Spaniard to win on the ATP Tour this season, while Nieminen, who has battled injury problems, was also pleased with his efforts.

"I had my chances but he answered with some good returns, I was able to come back in the second set but he was just better in the end. I still think it's been very positive for me here," he said.

On the WTA Tour, Maria Sharapova reached the second round of the China Open with a 6-4 7-6 victory over Bulgaria's Tsvetana Pironkova.

Sharapova was back to winning ways after crashing out in the first round of her defense of the Pan Pacific title last week to veteran Japanese player Kimiko Date Krumm.

Dane Caroline Wozniacki, who won the Pan-Pacific title, is top seed in China.