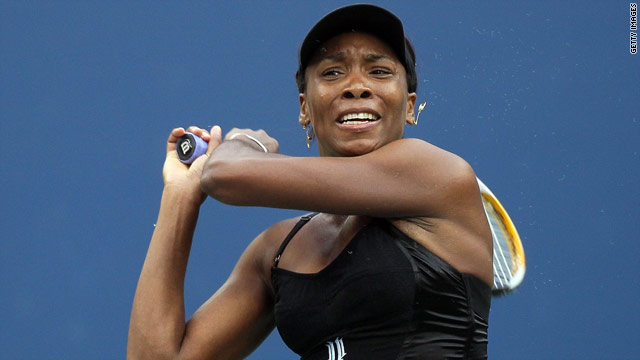 Venus Williams has not played for the United States' Fed Cup team since 2007, and will miss next month's final.
STORY HIGHLIGHTS

(CNN) -- Former world No. 1 Venus Williams will miss the rest of the 2010 tennis season due to knee problems, meaning the American is ruled out of the Fed Cup final and the WTA Championships.

The 30-year-old, who is now third in the rankings, has not played since losing in the semifinals of the U.S. Open last month to eventual winner Kim Clijsters.

"I am very disappointed to announce that I will be unable to play in the season-ending WTA Championships and Fed Cup final," the seven-time Grand Slam champion said in statement carried by the Sports Network website.

"I have been getting treatment and therapy on my knee and have been making progress, but unfortunately must continue to keep weight off my knee for the short term and won't be ready to return to competition in 2010.

I have been getting treatment on my knee and have been making progress, but won't be ready to return in 2010
--Venus Williams
RELATED TOPICS

"I am looking forward to returning to full health in time for the start of 2011 season and hopefully having the opportunity to play in both the Fed Cup and WTA Championships next year."

Williams has not played for the U.S. Fed Cup team since 2007, and had hoped to be available for the rematch with defending champions Italy in San Diego on November 6-7.

But the injury which kept her on the sidelines between losing in the Wimbledon quarterfinals in early July and the opening round of the year's final Grand Slam in New York means that she will be aiming to be fit for January's Australian Open.

Williams had yet to qualify for the WTA Championships in Doha starting on October 26, but was fifth behind those who are already guaranteed a place at the lucrative event: her younger sister Serena, Clijsters, Russia's Vera Zvonareva and Caroline Wozniacki.

Wozniacki is at the top of the Race To Doha standings, and is also poised to take Serena's No. 1 ranking if she can win her quarterfinal at the China Open on Thursday.

Serena has not played since having foot surgery in July, meaning the 20-year-old Dane can reach the top despite not having won a major tournament -- her best result is runner-up to Clijsters at the 2009 U.S. Open.