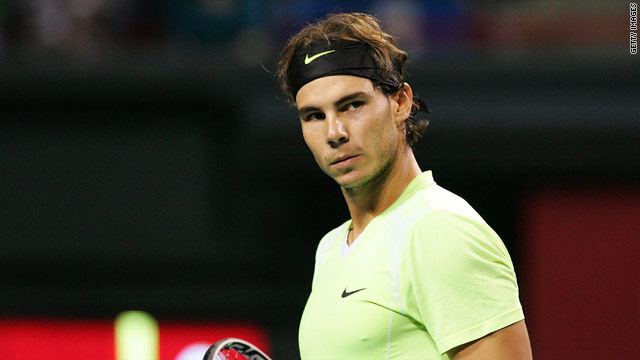 (CNN) -- World number one Rafael Nadal had to save two match points before beating Viktor Troicki of Serbia to reach the final of the Japan Open on Saturday.

Troicki wasted opportunities at 6-5 and 7-6 in the third set tiebreaker and also came within two points of victory as he earlier led 6-5 and 30-15.

But Nadal showed his renowned fighting qualities to pull off a 7-6 4-6 7-6 victory and a place in the final against France's Gael Monfils.

"It is frustrating, even if I won the second round here after being match point down," Troicki told the official ATP Tour website.

"I still think it was a great match from both of us."

Nadal, who suffered a shock defeat in the semifinal of the Thailand Open to Spain's Guillermo Garcia-Lopez, admitted it had played on his mind.

The important thing was that I got the win this time, unlike last week in the Bangkok semifinals
--Rafael Nadal
RELATED TOPICS

"The worst part of the match was when I lost my serve serving for the match, I was not happy with how I played the last few games.

"But the important thing was that I got the win this time, unlike last week in the Bangkok semifinals. Maybe that experience also affected me a bit today."

Nadal is embarking on the current Asian swing after completing his third grand slam triumph of the season at the U.S. Open last month.

He has a 6-1 win record over Monfils, who earlier beat Radek Stepanek of the Czech Republic 6-3 6-3.

"I'm really happy to be in the final in Tokyo for the first time," he said.

The 24-year-old, who staved off a match point to beat Andy Roddick in the quarterfinals, struck five aces and converted three of five break point opportunities for a comfortable win.