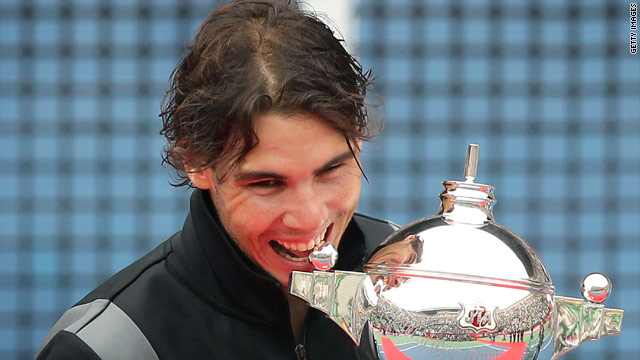 Rafael Nadal takes his traditional bite out of the trophy after winning the Japan Open title.
STORY HIGHLIGHTS

(CNN) -- World number one Rafael Nadal returned to winning ways as he captured his seventh title of the season with a straight sets win over Gael Monfils of France in the Japan Open on Sunday.

Nadal was beaten in the semifinals of the preceding Thailand Open and had to survive two match points against Serbia's Viktor Troicki to reach the final where he made no mistake against Monfils.

The 24-year-old Spaniard cruised to a 6-1 7-5 win over the fifth seed and wants to continue the domination he has shown this season by winning three grand slams.

Nadal is one of only three players to have qualified for the end of season ATP World Tour Finals in London, "the most difficult tournament for me," he said.

Nadal made the ideal start as he broke Monfils early and took the opener for the loss of a single game.

The second set was closer, but Nadal broke through in the 11th game to lead 6-5 and served out for victory.

He has only lost once to Monfils, who admitted he had faced a tough task.

"I think Rafa likes my type of game, and I didn't find a solution to give him a trouble. He just played solid," he said.

Nadal will now play in Shanghai next week, the third leg of his Asian swing after winning the U.S. Open title for the first time last month.