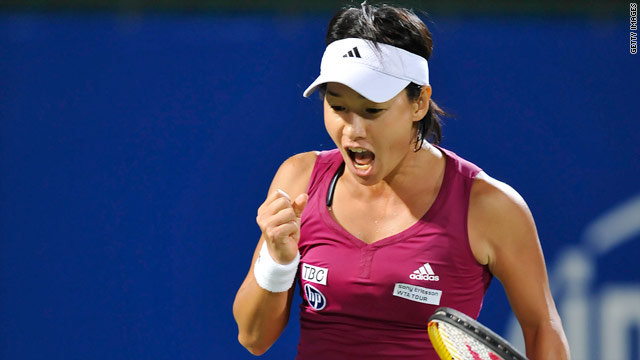 Fresh from beating former No. 1 Maria Sharapova in Tokyo a fortnight ago, the 40-year-old continued her remarkable form with a 5-7 6-3 7-6 victory over the Australian to advance into the semifinals in Osaka.

It was a stunning success for Date Krumm, who recovered from losing the opening set to the top seed and defending champion to close out the match with her second match point.

The veteran will now face third seed Shahar Peer in the last four, after she overcame the Czech Republic's Iveta Benesova 6-2 6-0.

The 23-year-old Israeli looked comfortable against seventh seed Benesova, wrapping up her straight-sets victory in less than an hour.

It will be the French player's third semifinal of the season as she fired six aces to set up a last-four clash with Tamarine Tanasugarn.

Meanwhile, second seed Daniela Hantuchova missed out on a last-four place at the General Ladies Linz event in Austria after Patty Schnyder avenged her defeat by the Slovakian in the 2007 final.

The Swiss left-hander won 6-4 6-4 to set up a semifinal clash with sixth-seeded Czech Andrea Petkovic, who eliminated Greek qualifier Eleni Daniilidou with a 6-3 6-2 victory.

The Serbian will face Roberta Vinci on Saturday after the Italian upset her ninth-seeded compatriot Sara Errani 5-7 6-3 6-4.