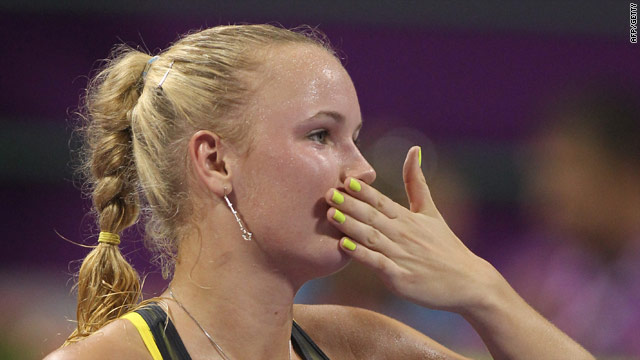 Wozniacki has powered to the top of the world rankings with a late season surge.
STORY HIGHLIGHTS

(CNN) -- Caroline Wozniacki recovered from the loss of the opening set to beat French Open champion Francesca Schiavone at the WTA Championships in Doha and seal the year-end No.1 spot.

The Dane prevailed 3-6 6-1 6-1 on Thursday to claim her second victory in the Maroon Group round-robin and clinch her place in the semifinals of the $4.5 million tournament.

Meanwhile, in the other half of the competition world number three Kim Clijsters secured the final spot in Saturday's semis with a hard-fought 6-4 5-7 6-1 win over Belarus's Victoria Azarenka.

Top seeds Wozniacki and Clijsters are joined in the last four of the season-ending contest by Australia's Samantha Stosur and Vera Zvonareva of Russia.

For Wozniacki the result guarantees she will top the global rankings in 2010, having fluffed a chance to seal the status 24 hours earlier as she slumped to a straight sets defeat to Stosur.

Is Wozniacki worthy number one ?

Italy's Schiavone, 30, took the first set from Wozniacki with the sort of attacking tennis which had marked her first grand slam triumph on the clay of Roland Garros, but errors crept into her game in the second set as her opponent leveled.

Wozniacki, 10 years Schiavone's junior, gained an early break in the decider and never looked back, closing it out on her fourth match point.

The 20-year-old is yet to win a grand slam but has produced a late season run of five tournament wins from seven, to become world number one at the expense of the injured Serena Williams of the United States.

She is the 20th woman to achieve the status since the rankings were introduced in the Open era.

"When you're playing the tournament, the only thing you're thinking of in your matches is winning them - but being No.1 and winning grand slams are things I've dreamed about since I was a little girl," Wozniacki told the official WTA website.

Belgium's Clijsters was also made to work hard for victory over 10th-ranked Azarenka.

The 27-year-old lost a tight second set, but recovered to dominate the third and dispose of her 21-year-old opponent in just 26 minutes.

Clijsters will now meet Zvonareva in the final group match on Friday, to decide the seeding's for Saturday's semifinal line-up.

In the other match of the day world number nine Elena Dementieva secured a superb three-set victory over Stosur, but the Russian's earlier results in the tournament cost her a place in the final stages of the competition.

Dementieva had been thrashed in straight sets by Wozniacki in her last match, winning just two games and appeared to be hampered by injury.

But she was a different proposition in her second match in the round robin, recovering from a set down to unsettle the Australian and take the decider on a tiebreak.