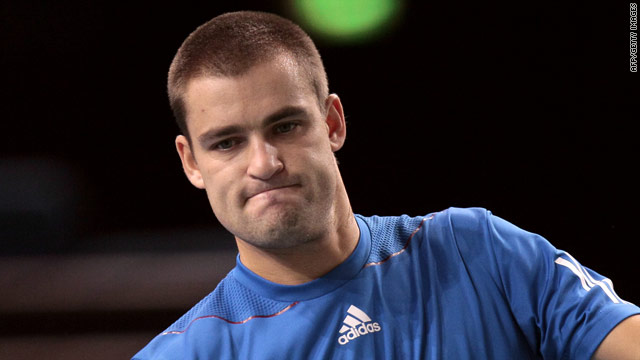 Mikhail Youzhny had a first-round bye in France and pulled out of his opening match while trailing to Ernests Gulbis.
STORY HIGHLIGHTS
RELATED TOPICS

(CNN) -- Mikhail Youzhny's hopes of reaching the lucrative season-ending ATP World Tour Finals in London were crushed on Tuesday when the Russian suffered a back injury.

The 28-year-old is 10th in the standings, but his bid to win one of the remaining three places for the eight-man event was halted in the second round of the Paris Masters.

Seeded ninth, Youzhny was trailing Ernests Gulbis 6-4 3-0 when he had to quit -- meaning the Latvian will next play either American eight seed Andy Roddick or Finland's Jarkko Nieminen.

Sixth seed Fernando Verdasco kept his own hopes alive as he came from behind to beat veteran Frenchman Arnaud Clement 3-6 6-3 6-0 for the left-hander's second win since reaching the U.S. Open quarterfinals in September.

The Spaniard, who is ninth in the ATP standings, will play either French 12th seed Gael Monfils -- last year's losing finalist -- or German Benjamin Becker in the third round.

In Tuesday's other second-round matches, Radek Stepanek beat Spain's Nicolas Almagro 7-6 (7-3) 6-4, with the Czech to next face either top seed Roger Federer or France's Richard Gasquet.

Fifth-seeded Czech Tomas Berdych, who is first in line for a London place, beat French wildcard entry Florent Serra 6-3 6-1 in the late match.

Third seed Andy Murray, who also had an opening bye, will start his campaign against Argentina's David Nalbandian after the 2007 champion defeated Spain's Marcel Granollers 6-3 6-1.

Russian 10th seed Nikolay Davydenko will take on Thomaz Belluci in his opening match after the Brazilian began with a hard-fought 7-6 (7-5) 5-7 6-3 victory over Germany's Philipp Kohlschreiber.

If he wins that match, Davydenko will then take on Berdych.

World No. 1 Rafael Nadal pulled out of the tournament on Monday due to shoulder problems, but expects to be fit for the November 21-28 London event.