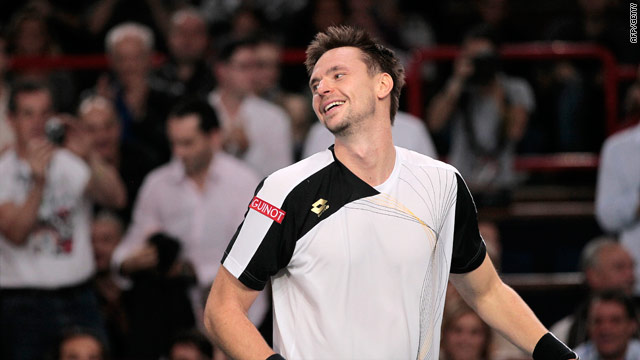 It proved a match too far for Monfils, who had beaten Andy Murray and top seed Roger Federer in successive three-setters to earn his clash against the fourth seed, who was winning his first Masters crown.

Soderling, a two-time French Open finalist in Paris, had to survive three match points in his semifinal against Michael Llodra on his way to the final.

Monfils, who lost in the 2009 final to Novak Djokovic, staved off five in beating Federer.

"I know it's difficult to lose two finals in a row in this city but Monfils played incredible tennis this week," said Soderling.

"He beat Roger (Federer) yesterday and I also know how difficult that is."

But the 12th-seeded Monfils could not conjure up any more heroics and looked fatigued as Soderling took the opener for the loss of a single game.

The second was closer, but Monfils went down tamely in the tiebreaker, the Swede clinching victory with a fine volley at the net.

"I've had a week full of emotions," admitted Monfils.

His next date will be with the French team that take on Serbia in the Davis Cup final in Belgrade on December 3-5 while Soderling will head to the ATP World Tour Finals at the end of the month in London in fine fettle.