Nadal battles back to topple Roddick; Djokovic eases past Berdych 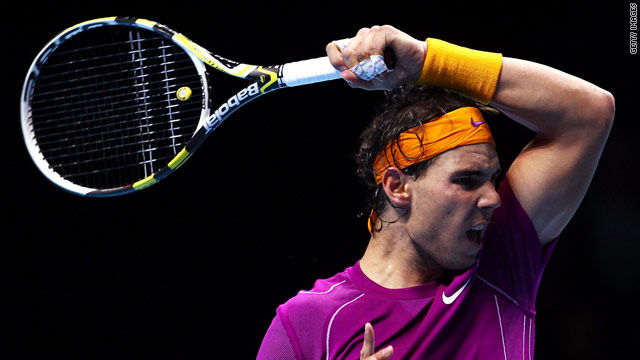 (CNN) -- World number one Rafael Nadal battled back from a set down to finally topple American Andy Roddick in an epic clash at the ATP World Tour finals.

The Spaniard looked out of sorts in the opening set but slowly returned to form as the game progressed to secure a 3-6 7-6 6-4 victory in two hours 30 minutes.

After a near five week break from the game due to injury, Nadal was rusty during the opening set and lost his opening service game as Roddick opened up a 3-0 lead.

Nadal struggled to recover from his slovenly start and Roddick held his serve to close out the first set 6-3 in just 49 minutes.

The second set saw Nadal broken again early on but the Spaniard finally made inroads into Roddick's booming serve to square the set at 2-2.

After that both players held firm on serve before Nadal took the tie break and his first set at the O2 Arena in London.

I started the match nervous, without rhythm. For me its a very important victory.
--Rafael Nadal
RELATED TOPICS

The deciding set went with serve until the sixth game when a passing winner handed Nadal a precious break. Roddick ensured Nadal would have to serve for the match and he duly obliged to seal a marathon battle.

Afterwards Nadal told Sky Sports: "I started the match nervous, without rhythm. Andy is a very aggressive player and it was very difficult. He can rally from the baseline and from the net, it's very difficult to pass him.

"The atmosphere here is fantastic, I'm very happy to win. For me its a very important victory."

Novak Djokovic made an impressive start to his assault on the ATP World Tour Finals title with a straight sets victory over Tomas Berdych.

The world number three, who won the season-ending tournament in Shanghai in 2008, made light work of his Czech opponent, winning 6-3 6-3 in just one hour 28 minutes.

The tone was set in the very first game, when Berdych served two double faults and Djokovic sealed an important break.

In front of watching soccer legend Diego Maradona -- former player and coach of Argentina -- the Serb pressed home his advantage to wrap up the opening set in 43 minutes.

Djokovic then broke in the third game of the second set to kill off his opponent, who made 19 unforced errors in the match.

"I couldn't ask for a better start of the tournament," Djokovic said. "I was trying to focus on my game and do the things that I planned to do tactically with my coach. I think I did well.

"You have to be really on the top of the game in order to win, because these players who are taking part in this tournament are the best players in the world. There is no easy match [or] easy opponent."