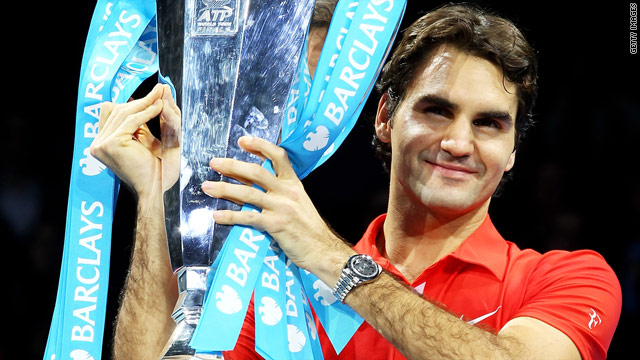 Roger Federer won the 66th title of his career, consolidating his position of fourth in the all-time standings.
STORY HIGHLIGHTS

(CNN) -- Roger Federer maintained his indoor supremacy over top-ranked Rafael Nadal as he won the season-ending ATP World Tour Finals event for the fifth time in his career on Sunday.

Nadal held a 14-7 career record over his longtime rival before the final, but the Spaniard slumped to his third successive indoor defeat to the Swiss player despite battling back strongly in the second set in London.

Federer claimed his 66th career title and the $1.63 million first prize with a 6-3 3-6 6-1 success in the tournament's first final played between the world's top-two players in 24 years.

Both players went into the match on the back of four successive victories, with Federer not having lost a set.

The 29-year-old, who lost his No. 1 ranking again to Nadal this year, won the first set in just 32 minutes after breaking his opponent in the eighth game and then serving out to love.

Nadal, not looking as sharp as earlier in the week following his epic semifinal win over Andy Murray, bounced back to break Federer in the fourth game of the second set to go 3-1 up and then held serve to level the match after another 34 minutes.

Federer regained his momentum in the fourth game of the decider, which went to deuce -- as did the next game as he stopped Nadal from an immediate break back and clinched it with his sixth ace.

Federer again broke Nadal in the sixth game and was untroubled in serving out to follow up his victories from 2003-04 and 2006-07.

It was his fifth title of 2010, including the Australian Open in January, as he won 65 matches and lost just 13 -- four of them finals.

"I've really enjoyed playing here this week, it's been a wonderful atmosphere once again. Rafa's had an amazing year, one any player dreams of," he told the crowd.

It left the 24-year-old Nadal -- who completed his collection of all four Grand Slams at the U.S. Open in September -- still seeking to win the event for the first time, and still without a title in an indoor hardcourt tournament.

Nadal, who will end 2010 at the top of the rankings despite the defeat, had won their most previous encounter in the final of the Madrid Masters in May.

"I want to congratulate Roger. He played unbelievable throughout the whole week. It was a fantastic year for me, probably the most emotional of my career," he said.

With the men's singles competitions now at a close, the focus turns to the Davis Cup final between Serbia and France starting on Friday.