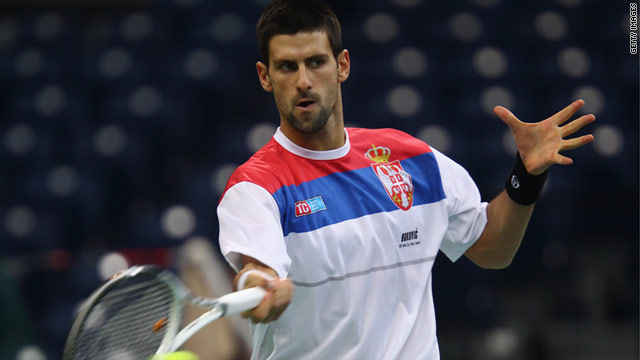 (CNN) -- World No. 3 Novak Djokovic hopes home advantage will give Serbia the edge in the Davis Cup final against France, starting on Friday.

Djokovic, Serbia's No. 1 player, has been drawn to face Gilles Simon in the second singles match in Belgrade, following Janko Tipsarevic's opener against Gael Monfils.

He comes into the event after losing to eventual winner Roger Federer in the semifinals of the season-ending ATP World Tour Finals.

"We're all very excited and can't wait for the first point to start. Hopefully [the home support] will be an advantage for us over our opponents. We are all in good shape, physically and mentally fresh to perform our best tennis," the 23-year-old said at Thursday's draw.

Simon, once ranked sixth in the world but now down at 42 after suffering with injuries, beat Djokovic in their first encounter in 2008 but has lost all five since.

The pressure I have on my back will help me to forget the crowd is against me. If I have to let my emotions out, I will
--Gilles Simon
RELATED TOPICS

"I think the pressure I have on my back will for sure help me to forget the crowd is against me. I will see how I will react, but I will be natural so if I have to let my emotions out, I will," the 25-year-old Frenchman said.

"Since I was a young child it was a dream to play in the Davis Cup final. Also with my friend, Gael Monfils, it's just unbelievable. I really hope we're going to win the trophy -- that would be perfect."

Monfils, ranked 12th in the world, has a 2-2 record against No. 49 Tipsarevic -- who was Serbia's semifinal hero with two singles victories against the Czech Republic on home soil.

"I know Janko. He will be very nervous because he plans to come out first on the court in front of the Serbian crowd. It will be tough for him. I will try to be very relaxed and just play my game," Monfils said.

In Saturday's doubles, Viktor Troicki and Nenad Zimonjic will take on the French pairing of Arnaud Clement and Michael Llodra.

The French are seeking a fourth title, the last coming back in 2001.

The first came in 1991 after beating Yugoslavia in the semifinals, but the two countries have not met in the competition since Serbia again became independent from the former federal republic.

Neither Yugoslavia nor Serbia have won the Davis Cup.