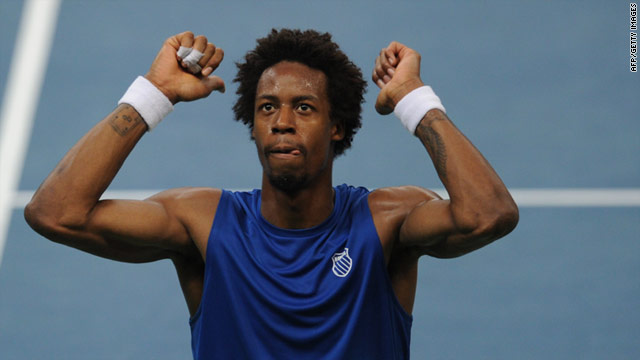 Gael Monfils put France ahead in the Davis Cup final before Novak Djokovic leveled for the home team in Belgrade.
STORY HIGHLIGHTS

(CNN) -- Serbia and France are tied at 1-1 after the first day of the Davis Cup final after sharing the opening singles rubbers in Belgrade.

Gael Monfils put France ahead with an emphatic 6-1 7-6 6-0 win over Janko Tipsarevic before Novak Djokovic brushed aside Gilles Simon 6-3 6-1 7-5 to level for the hosts.

Djokovic hit a blistering 62 winners for his sixth win out of six in singles ties for Serbia this year as they bid for their first Davis Cup title.

The world number three was always in command against Simon, who had been handed the second French singles berth in the place of the injured Jo-Wilfried Tsonga and to the roars of the capacity home crowd won in two hours 18 minutes.

Definitely it's an advantage for the home team playing in front of their people. To be able to have this support is really relevant
--Novak Djokovic
RELATED TOPICS

"Definitely it's an advantage for the home team playing in front of their people. To be able to have this support is really relevant," Djokovic told the official Davis Cup website..

Earlier, the in-form Monfils silenced a partisan home crowd by thrashing Janko Tipsarevic in the opening singles rubber on Friday.

Speaking to France 3 TV, Monfils said: "I got into the match straight away and that helped settle me.

"I'm really happy with the result. Janko started off with two double faults and straight away I saw that he was tense. That helped me to relax a little."

Tipsarevic has often been the hero for Serbia in Davis Cup over recent years, but he was subjected to booing from some of his own fans as he capitulated in a one-sided third set.

Saturday's doubles rubber will see Michael Llodra and Arnaud Clement of France take on Serbian duo Nenad Zimonjic and Viktor Troicki, but Djokovic could be drafted in at short notice to bolster the home team.

His match with world number 12 Monfils in Sunday's reverse singles is also set to have a strong influence on the outcome.