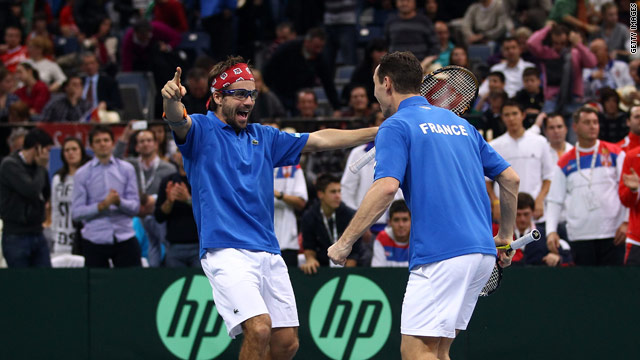 Arnaud Clement and Michael Llodra savor their moment of victory in the vital doubles in Belgrade.
STORY HIGHLIGHTS

(CNN) -- Arnaud Clement and Michael Llodra came from two sets down to beat Serbia's Nemad Zimonjic and Viktor Troicki in a five-set thriller to give France a 2-1 lead in the Davis Cup final on Saturday.

The French doubles pairing rallied for a 3-6 6-7 6-4 7-5 6-4 victory after four hours and 34 minutes of pulsating action, sending home a partisan crowd in the Belgrade Arena disappointed.

Having leveled at two sets all, the French broke Zimonjic for the first time to take a decisive lead in the decider.

Despite gallant efforts, the Serbian pair were unable to break back and Llodra kept his nerve to serve out for the victory, sealing it on the second of three match points.

History now points to a French victory, with the team taking the pivotal doubles winning 30 of the last 32 finals.

Both won their respective first singles matches Friday, with Monfils beating Janko Tipsarevic to give France a 1-0 lead before Djokovic evened it up with a straight sets victory over Gilles Simon.

Tipsarevic and Simon, a late replacement for the injured Jo-Wilfred Tsonga, will are slated to play the second reverse singles but the captains could make late changes.

It had all started so promisingly for Troicki and Zimonjic as they claimed the decisive break in the fourth game of the opening set, Troicki forcing Clement into a volleying area to gain the advantage.

The French pair had a set point in the 10th game of the second set, but fell behind 6-5 when Clement was broken, double faulting to hand the advantage to the Serbs.

But with the atmosphere reaching fever pitch and with several interruptions after shouts from both sets of supporters distracted the players, France broke back on Troicki's service to force a tiebreak.

Serbia gained the early mini-break and wrapped up a two sets to love lead on the first of three set points.

But Clement and Llodra were not to be denied and took a liking again to Troicki's service.

The only man under 30 years of age on the court was broken in the first game of the third set and then in the 11th game of the fourth as France sensationally hit back to level at two sets all.

Hosts Serbia are playing in the Davis Cup final for the first time, with Djokovic playing an inspirational role in previous ties winning all five of his singles matches.