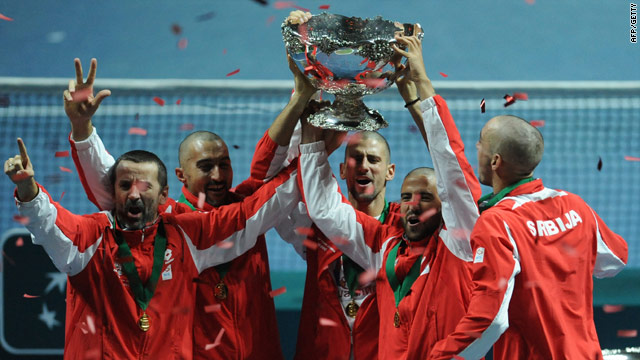 (CNN) -- Viktor Troicki brushed aside Michael Llodra in straight sets in the deciding singles rubber as Serbia won the Davis Cup final for the first time with a 3-2 win over nine-time champions France on Sunday.

The 24-year-old was in irresistible form as he won 6-2 6-2 6-3 in just two hours 13 minutes as the hosts claimed the most coveted team award in tennis to spark scenes of wild celebration on and off the court at the Belgrade Arena.

Earlier, Novak Djokovic won his sixth singles tie from six matches in the Davis Cup this season as he beat France's Gael Monfils to level the tie at 2-2.

Troicki was drafted into the deciding singles in place of Janko Tipsarevic and it proved an inspired choice by Bogan Obradovic.

By contrast, French captain Guy Forget saw his gamble of picking Llodra ahead of Gilles Simon backfire as the left-hander could not cope with the aggressive play of Troicki, who hit a stream of winners and broke him eight times.

The final time came as Llodra served to keep his country in the tie at two sets and 5-3 down. Facing two match points, he saved the first but another passing shot winner gave Troicki his stunning victory.

"This is the most intense pressure ever in my life and to win it in front of my home crowd I think is the best possible way," he told Sky Sports.

"I'm lost for words, it's unbelievable."

Forget was angered by some of the antics of the enthusiastic home crowd.

"We heard whistles when the French team was serving and when the ball was in the air. It was only a small minority but it really is intolerable," he told AFP.

"When you play against your opponents as well as imbeciles in the stadium, it's very tiring."

The dramatic finale was set up after home hero Djokovic scored a crushing 6-2 6-2 6-4 win over Monfils.

Serbia had been up against it after Llodra and Arnaud Clement beat Nemad Zimonjic and Troicki in Saturday's pivotal doubles to go 2-1 up.

However, world number three Djokovic stepped up to the plate to sweep aside Monfils, who had been in such good form as he beat Tipsarevic in the opening rubber of the five-match final.

"It's one of the best matches of my career, in the circumstances," Djokovic told the official Davis Cup website.

"I have a lot of respect for the French team, especially Gael, who is a good friend."

Djokovic was always in command after breaking Monfils twice in the opening set and he repeated the dose in the second.

Monfils had two breaks of his own as he battled in the third set but could not hold his own and slipped to a tame defeat which gave the momentum to Serbia.