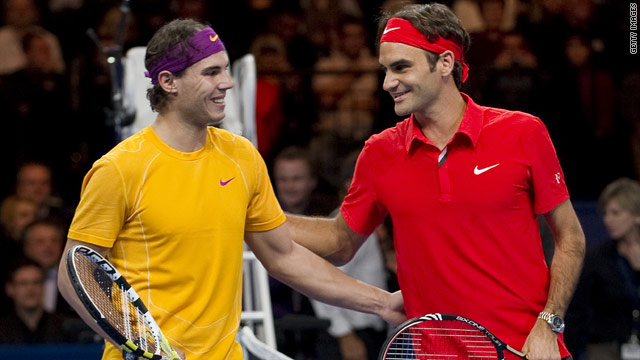 (CNN) -- World No. 1 Rafael Nadal is looking forward to facing his rival Roger Federer in the second of two charity exhibition matches, having raised $2.6 million on Tuesday night.

Nadal suffered a 4-6 6-3 6-3 defeat to his second-ranked Swiss opponent in their opening clash in Zurich.

The contest was dubbed the "Match for Africa" and raised funds for the Roger Federer Foundation ahead of Wednesday's rematch in the Spanish capital Madrid.

"It'll be very exciting for me and very emotional for me also," Spaniard Nadal told the ATP World Tour website.

The proceeds from Wednesday's "Joining Forces for the Benefit of Children" match will go to the 23-year-old Nadal's charity.

Sixteen-time grand slam champion Federer said winning Tuesday's three-set event was not as important as the money it raised.

"The focus is just solely on two players and one match," Federer said after the match. "There was quite a pressure going into a match like this, but at the end of the day, it's so not important who won the match tonight.

"It was a match for Africa, this money is going to go to a good cause -- for my foundation, for kids in Africa -- so I'm so proud and so happy that we all made it work, so thanks again to everybody."