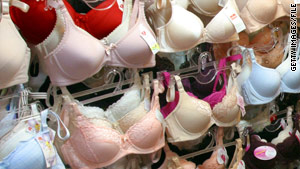 The color scheme has left male users scratching their heads and asking "Huh?"

So, what is behind the trend? It's all part of an effort to raise awareness for breast cancer by asking women to post the color of the bra they're wearing.

Female Facebookers started catching on this week as a message made its rounds through the inboxes of the social media network.

"We are playing a game for Breast Cancer Awareness," one form of the message read. "Write the color of your bra as your status -- just the color, nothing else!! Copy this and pass it on to all girls -- NO MEN!! This will be fun to see how it spreads."

By Friday, all the colors of the Victoria's Secret rainbow were present in users' news feeds when they logged in.

A spokeswoman for Facebook said it's not clear where or how the message started, calling it an example of a grass-roots movement beginning on the social networking site.

"What is particularly unique about this grass-roots campaign is that it seems to have been started by a user or group of users, as opposed to an official entity, and spread virally throughout Facebook," Facebook's Malorie Lucich said. "It's an ideal example of how an individual voice can be magnified to create awareness for a good cause and ignite action among millions by using a site like Facebook."

Breast cancer groups say they are happy that the disease, which affects more than 200,000 women in the United States a year, is getting attention.

"It's not one of our campaigns, but we're all for it," said Andrea Rader, a spokeswoman for Susan G. Komen for the Cure. "Just about anything that raises this issue in a positive, fun way is just terrific."

Lucich said hundreds, if not thousands, of users were posting their color choices directly to the Susan G. Komen and Breast Cancer Awareness Facebook pages.

Rader encouraged women to take the trend one step further by visiting the Komen Web site and getting more information about ways to raise awareness.

Meanwhile, some tech blogs were calling the color string the new "25 Things," a meme -- Internet speak for a concept or catchphrase that spreads quickly on the Web -- that went viral in early 2009. Users were asked to post notes with random tidbits about themselves and then "tag" other users to do the same.

The "25 Things" note was virtually unavoidable for a three-week period as users passed it on, sort of like a modern-day chain letter. It's unclear whether the color meme will have the same popularity if half of Facebook's 350 million active users can't participate.