Is the 'Avatar' concept really possible? 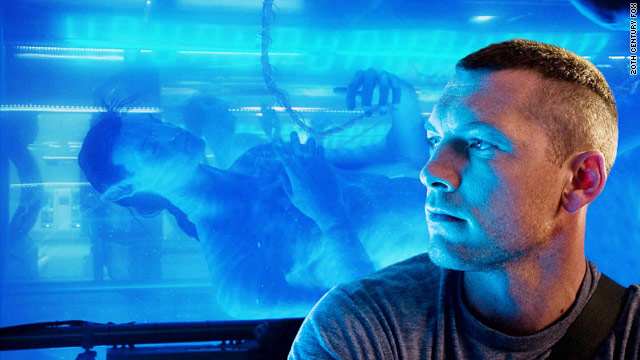 Jake Sully (Sam Worthington) contemplates the avatar body he will inhabit via brain signals in the Oscar-nominated "Avatar."
STORY HIGHLIGHTS

(CNN) -- Now the highest-grossing film ever, "Avatar," has captivated millions of viewers with its picturesque scenery, extraterrestrial battles, and nature-loving, blue-skinned aliens.

The premise of the film is that humans can enter the world of these 10-foot aliens, called the Na'vi, by way of half-human, half-Na'vi hybrids. A high-tech interfacing mechanism allows a human to remain inert while controlling one of these avatar hybrids just by thinking.

Not only does the human manipulate the avatar's movements and speech, but he or she also experiences life -- every sensation, feeling and emotion -- through the eyes of the hybrid, as if consciousness were transferred.

Scientists say we are many decades, even centuries, away from making this kind of sophisticated interaction possible, if it can be done at all. But the fundamentals of components required to create this complicated system of mind-controlled avatars are already in the works, and have useful applications in medicine.

"We're starting to understand the basic building blocks, but the biggest challenges will be emotion and thought -- how to make another organism think what you think, to feel what you feel -- because those networks are much more difficult to sort out," said Dr. Brian Litt, associate professor of neurology and bioengineering at the University of Pennsylvania.

See which films have been nominated for Academy Awards

Although nothing as complex as manipulating a creature through thought has been done, scientists working on allowing handicapped people to move prosthetic limbs with their minds are making headway. This idea actually played a role in the movie: Protagonist Jake Sully was in a wheelchair in his human body, but could walk, run and jump as his avatar.

One demonstration has been shown by Miguel Nicolelis, a neuroscientist at Duke University, who is working on robotic leg braces. In 2008, his group got a monkey in North Carolina to mentally control the walking patterns of a robot in Japan.

This was done by implanting electrodes in the brains of two rhesus monkeys. The electrodes recorded how cells in the brain's motor and sensory cortex responded to walking on the treadmill at various speeds. The monkeys' legs also had sensors to record walking patterns.

Researchers used all this information to predict the exact speed of movement and stride length of the legs, and uploaded that information to a robot in Japan, getting the robot to move in synch with a monkey thousands of miles away in real time. Even when the treadmill was turned off, a monkey continued making the robot walk just by thinking for a few minutes.

Another arena is one of virtual reality: controlling an avatar in a video game with your mind. Jaime Pineda, cognitive neuroscientist at the University of California, San Diego, is working with a brain-computer interface that allows participants to move a car around a racetrack, fly a plane and do other virtual tasks on a screen, simply by thinking. The mental training for this takes about four to six hours, he said.

"It is based on the motor parts of your brain. That's what we're recording from, and so if you think about moving, it's actually as if you are actually moving," he said.

Apart from the entertainment value, Pineda sees this as a future therapy for autistic children. The theory is that because people with autism have less conductivity between various parts of the brain, participating in mind-controlled video games may normalize those circuits. Results from his lab show improvement in social interaction and other behaviors after 10 or 20 weeks of playing the game in the lab.

For an "Avatar"-style brain-computer interface, an enormous amount of data would have to be transferred from the person to the avatar extremely quickly, Litt said.

Video: All about 'Avatar'

Here's what's possible now: Scientists such as Gerwin Schalk at the New York State Department of Health's Wadsworth Center have harnessed the brain's electrical impulses to have people mentally type their thoughts using electrodes on the surface of the head. The rate is typically seven words per minute. In one epileptic patient who had electrodes already on the brain for clinical purposes, the record was 20 words per minute.

This kind of technology is useful for people who are paralyzed and cannot communicate, Schalk said. His research group also works on using electrodes to extract specific information from the brain such as people's actual actions, imagined actions and intended actions -- even how they move individual fingers.

The research "has changed that widespread assumption that it's not really impossible to acquire detailed information from the brain in humans," Schalk said.

In order to construct a high-tech interface that would allow two-way communication between an avatar and a person, there must be a better understanding of the brain itself, Litt said.

Litt's group studies the brain's networks involved in epilepsy. The researchers are looking at the abnormal circuits to figure out the basic units of the brain that generate seizures. They have licensed intellectual property for a device that can improve epilepsy by stimulating specific brain regions, potentially eliminating the need for surgery.

"I see tremendous possibilities for more and more ability to unlock these networks," he said.

Transferal of sensations and emotions

The area of this "avatar science" that will be most difficult to sort out is being able to feel and think as the avatar, Litt said.

Today there are auditory prostheses called cochlear implants that encode signals that allow people to hear who could not otherwise, as well as rudimentary visual aids. It is also possible to stick a pin in a particular part of someone's brain and induce sensations of various temperatures, pressures and even pain levels, just by stimulating certain neural circuits.

"But there's a far cry from doing that to being able to make somebody feel an emotion or see something," Litt said.

The technical hurdles, including transferring huge amounts of information extremely rapidly and building devices to both extract signals from the brain and inject signals into the brain, are significant, he said.

Clearly, people aren't going to be able to climb into personal pods and use their brains to remotely control 10-foot-tall creatures any time soon. Andrew Schwartz, neuroscientist at the University of Pittsburgh, added in an e-mail that it is not even clear what "consciousness" is. There's no rigorous definition, and how it looks in the brain is unknown.

"It's a wonderful movie, but it shouldn't be taken as anything but fantasy," he said.