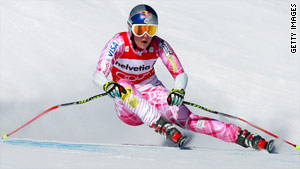 Some athletes, like American skier Lindsey Vonn, are telling fans they won't twitter at the Games.
STORY HIGHLIGHTS
RELATED TOPICS

(WIRED) -- American skier Lindsey Vonn, one of the potential stars of the 2010 Winter Olympics, told her nearly 35,000 Twitter followers that she would not be posting to the social network until after the Games were over, perhaps based on a faulty understanding of the International Olympic Committee's rules on blogging and social networking.

Vonn wrote that "because of the Olympic rules (blackout period) I will not be able to post any updates from now until march 3rd. Sorry, it bums me out too!" In the update, which was also posted to Vonn's Facebook account, she encouraged fans to keep sending her messages.

But there is no Olympic rule that sets up a blackout period for athletes according to Bob Condron, the Director of Media Services for the United States Olympic Committee.

"Athletes are free to blog during the Games," says Condron. "And Twitter is just a blog that's written 140 characters at a time."

There are some restrictions on what athletes can do online during the Olympics. According to the IOC Blogging Guidelines for the 2010 Games, athletes and other accredited people must keep their posts confined to their personal experiences.

"You can't act as a journalist if you aren't," says Condron. "You need to do things in a first person way."

Rule 49 of the Olympic Charter says that "Only those persons accredited as media may act as journalists, reporters or in any other media capacity."

The other most significant restriction on athletes posts is a ban on references to sponsors or advertisers who aren't official Olympic partners. Vonn's Facebook page, which pictures her wearing logos of sponsors like Red Bull and Sprint, could break those rules, and be part of the reason for her break from posting.

Speedskater Nick Pearson also posted on Twitter that "Due to Olympic regulations I can no longer post pics on Twitter through the Olympics." But the IOC guidelines state that athletes may post photos of themselves as long as they don't show any of the actual sporting action during the Games.

Despite these restrictions, and the obvious confusion among athletes, Condron expects heavy social media activity among U.S. athletes in Vancouver.

"These are going to be the Twitter Olympics," says Condron. "There's no telling where the updates will come from. It could be the bench during a hockey game, or even on the medal stand."