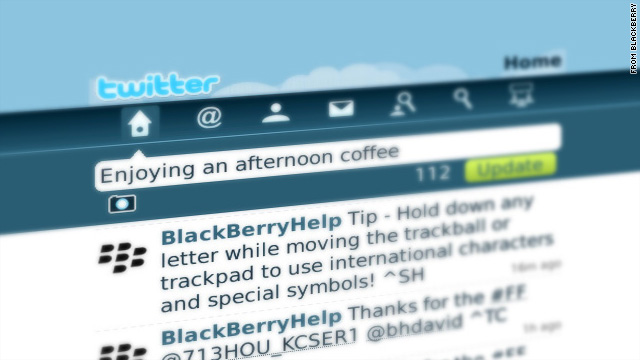 Blackberry for Twitter is being tested now and will be availabe for public beta testing later this year.
STORY HIGHLIGHTS
RELATED TOPICS

(CNN) -- BlackBerry has introduced its official Twitter application, offering users of the most popular smartphone brand a feature on the rival iPhone that they now can only covet.

On its official blog, Research In Motion, which owns BlackBerry, said it has begun sending out a limited number of invites to test Twitter for BlackBerry.

The application will notify users immediately about direct messages, send new photos directly to TwitPic and tweet while reading updates, instead of having to go to a different screen.

It will also provide instant URL shortening with the bit.ly feature and be able to filter searches and see feeds based on the user's location.

While unofficial apps like Seesmic, UberTwitter and TwitterBerry have existed for a while, this is the first official offering by BlackBerry and early reviews suggest it's a more complete package than what's been on the market before now.

"Swapping Twitterberry for Ubertwitter was one of the best decisions I've ever made in my life, but even that has its shortfalls," wrote blogger Kat Hannaford for the tech blog Gizmodo. "BlackBerry's impending Twitter app looks heaps better, from the design to actual usability."

The app is still in its beta format, according to the BlackBerry blog. Only people who have received the invite can use it now. But users interested in being part of its full beta test can sign up to be a part of it.

The public beta roll-out is set for an unspecified time later this year.

Research In Motion emphasized on the blog that the Twitter app is in its early stages and was asking for user feedback on what other features they'd like to see. Among those being considered is geotagging, the ability to create lists and update user profiles and the ability to log into multiple accounts.

According to Internet researcher ComScore, BlackBerry's Research In Motion operating platform had a healthy lead in the U.S. market in December, running on nearly 42 percent of the smartphones in the United States.

Apple, which owns the iPhone, was a distant second at 25 percent, followed by Microsoft at 19 percent, Palm at 6 percent and Google's Android system at 5 percent.