Bill Gates and the 'nuclear Renaissance' 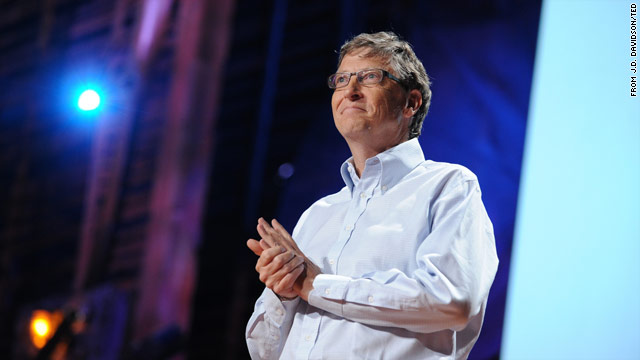 Bill Gates is backing a new kind of nuclear power plant. But some question the plan's viability.
STORY HIGHLIGHTS

(CNN) -- Say you were to give Bill Gates a really great present -- like the ability to cure crippling diseases or to pick all U.S. presidents for the next 50 years.

But you wouldn't have granted his one, true wish.

The Microsoft-founder-turned-philanthropist said at a recent speech in California that, more than new vaccines for AIDS or malaria or presidential selection power, what he really wants is clean energy at half its current cost.

To do that, he said, we'll need new technology.

Gates -- a father of the personal computer and quite the tech powerhouse -- said one of the brightest hopes for clean, cheap power is a new form of nuclear power plant that reuses waste uranium from existing nuclear reactors.

Gates actually described energy innovation in those terms: To prevent famine, poverty and the hardship that will come with global climate change we need "energy miracles," he said at the TED Conference in Long Beach.

Some nuclear scientists and critics say the nuclear technology Gates highlighted is misguided, naive and expensive.

The non-profit group is dedicated to "ideas worth spreading"

Others, like Craig Smith, a nuclear engineer at the Lawrence Livermore National Laboratory, said Gates is helping put the world on the verge of a "nuclear Renaissance" that could provide cheap power for everyone in the world -- forever.

"There's a new enthusiasm not only in the United States but, I think, worldwide for the use of nuclear energy," Smith said.

Smith's argument is bolstered by the fact that President Obama on Tuesday announced $8.3 billion in loan guarantees for a new nuclear power plant.

The proposed project, to be located in Burke County, Georgia, would be the first nuclear power plant built in the United States in three decades.

Most nuclear power plants today use radioactive elements like uranium to create nuclear fission and then produce electricity.

One problem: That reaction leaves behind uranium waste. To make matters worse, the United States hasn't identified a safe place to store the waste from the country's 104 nuclear reactors in the long term.

That's where the technology promoted by Gates comes in.

Gates has invested tens of millions of dollars in a Bellevue, Washington, company called TerraPower, according to TerraPower CEO John Gilleland.

TerraPower is working to create nuclear reactors that generate hyper-fast nuclear reactions able to eat away at the dangerous nuclear waste.

This has a number of potential benefits, Gilleland said. Among them:

• The Uranium isotope that's food for the new nuclear reactors doesn't have to be enriched, which means it's less likely to be used in atomic weapons.

• The fission reaction in the new process burns through the nuclear waste slowly, which makes the process safer. One supply of spent uranium could burn for 60 years.

• The process creates a large amount of energy from relatively small amounts of uranium, which is important as global supplies run short.

• The process generates uranium that can be burned again to create "effectively an infinite fuel supply."

What we're going to have to do at a global scale is create a new system.
--Bill Gates

Gilleland said it's not a matter of if the technology works.

"It's going to work -- for sure," he said. "The question will be precisely how well and how economically. But right now there are lots of people in the world who think it could begin to see common application in the 2020s."

Others scoff at the idea.

Gates is looking for a "silver bullet" technology to fix the world's climate problems, but no such technology exists, said Thomas B. Cochran, a nuclear physicist and senior scientist at the Natural Resources Defense Council, an environmental advocacy group that opposes new nuclear power plants.

"The idea that Gates is going to throw some money at a couple of guys that think they've got a new idea and this is gonna blossom into something that really works is a pretty low probability," he said.

Cochran compared Gates' call for investment in nuclear technology that would reuse uranium to Bernie Madoff's Ponzi scheme. It's a scam, he said.

Researchers have been working on similar, utopian ideas for more than 60 years, he said, and with no tangible result.

Action needs to be taken now to blunt the effects of climate change, he said; and new nuclear power technologies will take too long to develop and will be too expensive.

"If you're trying to address climate change mitigation, this is not the way to go in any case because it's too far into the future," he said.

"We need the solutions now. The focus on research and development ought to be on improvements in near-term applications, not these pie-in-the-sky reactor concepts that won't be deployed for decades."

Michael Mariotte, executive director of the Nuclear Information and Resource Service, an environmental and public-safety group, said the timeline is too slow.

The technology could be ready for testing in 20 years and ready for commercial use 20 years after that, Gates said in California.

"Our belief is that we need to make near-term carbon emissions reductions -- and in that sense, this doesn't help," Mariotte said.

"It diverts resources away from technologies that do work."

Others applaud Gates, one of the richest men in the world, for taking on a big problem like climate change with gusto and optimism.

"Look, I think this is the backing of a creative and innovative reactor concept," said Smith, the nuclear engineer at the Lawrence Livermore National Laboratory.

"That is a very good thing -- to allow people to stretch their minds and come up with new concepts."

It's unclear where the best clean-energy technology solutions will come from, Smith said, but many varieties of next-generation nuclear tech are under development, and the U.S. government has invested in several.

Ted Quinn, a former president of the American Nuclear Society and a consultant for the nuclear industry, said it's important for the United States to find a valuable use for nuclear waste.

"This is like an ultimate design that can burn a different type of fuel than we burn today. This burns the part of the fuel that we can't burn," he said of the Gates-backed project. "It helps the fuel cycle issues."

In his remarks in California, Gates said there will be no easy fix for climate change.

He encouraged optimism, along with heavier investment in solar, wind, battery and nuclear technologies.

That's the only way he will get his biggest wish, he said. "We have to drive full speed and get a miracle in a pretty tight timeline."