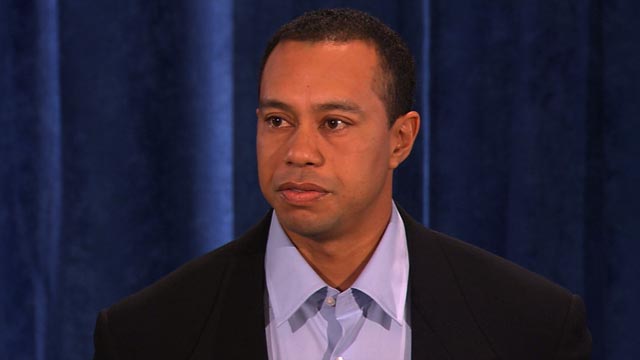 Some Web commenters found Tiger Woods' apology to be sincere, while others mocked the world's most famous golfer.
STORY HIGHLIGHTS

Before the press briefing at 11 a.m. ET, some online writers had speculated that Woods' talk would break records for video watched live online.

The thinking was that, with many people stuck in front of computers at office jobs, the Web would be a more convenient way to watch the speech than TV.

But initial reports from sites like Ustream, which publishes live video streams, and Trendrr, which tracks online buzz, show Woods' apology for his marital indiscretions did not get as much attention from Internet audiences as President Obama's inauguration, Michael Jackson's funeral or even the red carpet preview for the Twilight movie sequel "New Moon."

More than 680,000 people watched the 15-minute event on Ustream, according to that site's spokeswoman, Shari Foldes, who said viewership would have been higher had Woods' statement not been so brief. By comparison, 4.6 million Ustream viewers watched last summer's live memorial service for pop star Michael Jackson, which lasted about an hour and a half.

More than 1,000 Twitter posts per minute contained the word "Tiger" during the speech, according to the Web site Trendrr. In total, nearly 94,000 tweets were posted about Tiger Woods during the 11 a.m. ET hour, according to data from a Trendrr spokesman.

Video: Tiger: 'I have let you down'
RELATED TOPICS

But that pales in comparison to some other online news events Trendrr has watched. When rapper Kanye West stole the microphone from singer Taylor Swift at the Video Music Awards in September 2009, Twitter users posted 293,024 times on the subject in one hour, Trendrr spokesman Chris Thonis wrote in an e-mail to CNN. In July, when President Obama met with Russian leaders, the rate of Twitter posts on that subject was 175,000 per hour, he said.

"It will be hard to determine total daily Twitter numbers until the end of the day, but by looking at the hourly data you can see that buzz around Tiger is not nearly as heavy as some other events last year," Thonis wrote on Friday afternoon.

Woods' 15-minute apology was broadcast live on sites like CNN.com, YouTube, Hulu and Ustream. No Internet-wide numbers for Woods' speech were immediately available.

Watch some early estimates of the numbers

Obama's inauguration holds the apparent record for live online video views. Some 7.7 million people watched that event live on the Internet in January 2009, according to Akamai, which handles Web services for several major companies.

Live video on the Web poses a number of technical challenges, as it eats up monster amounts of Internet bandwidth. Only in recent years has live online video consumption started to take off.

Tiger Woods: 'I am so sorry'

Some people found Woods' apology to be sincere, while others mocked the world's most famous golfer.

On microblogs like Twitter, comments about Woods were mostly neutral; positive and negative reactions to his speech balanced each other out with a 1 to 1 ratio, according to socialmention.com, a Web site that tracks online opinion. Blogs responded more positively to Woods' statements, at least immediately after the speech, the site said.

Some online pundits were indifferent, mocking Woods' demeanor during the talk or making fun of the news media for putting so much significance on the story.

"This is hilarious. ESPN is building this Tiger Woods statement up like it's the State of the Union address," wrote Twitter user @jasoncercone.

On Facebook, a user named Jordan wrote: "Yeah, he is a celebrity but the rumors and carrying one mistake in his life is just rediculous (sic). Move on to something else to talk about and make jokes about."

Others wrote that Woods' presentation on Friday seemed stiff.

"Tiger Woods needs a teleprompter. At least he did not write notes on his hand!" wrote Twitter user @igobydoc, an apparent reference to a recent speech by former Alaska Gov. Sarah Palin.

Twitter user @Mike_White_ wrote: "Tiger Woods needs to apologize for that outfit he has on right now."

"I thought somebody died or something! Michael Jackson's family was more lively at his funeral than this pitiful press conference. Am I the only one LOL at this?" wrote a Facebook user named Tamera.

Some microbloggers jumped to Woods' defense:

Fellow pro golfer John Daly, who has had his own troubles off the course, posted this on Twitter after Woods finished speaking: "THE BIGGEST "MAJOR" TIGER IS GOING TO WIN NOW---IS GOING TO KEEP HIS FAMILY & I HOPE HE SUCCEEDS! I WISH HIM ALL THE BEST! JD."

Earlier, however, Daly posted, "Tiger--where is your wedding ring? Most Important I would think ..."

Submissions to CNN.com's iReport were almost universally supportive of Woods.

iReporter Melissa Fazli of Yorba Linda, California, had a camera rolling as Woods spoke and shared some of her reactions.

"It's great to know he's going to work on things with [wife] Elin," Fazli said. "Nike is the big answer. It's business, people. ... He employs a lot of people, so if he doesn't get his credibility back, a lot of people are gonna be out of work."

iReporter Hao Li, a Californian studying abroad in London, England, thinks those who are angry with the golfer may be hypocrites.